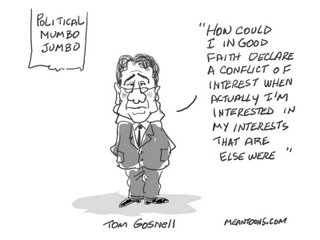 FINDING 1B – While Not Required to Screen for Conflicts of Interest, the Screening Process the Department Created Was Not Effective

“Are you aware of any other circumstances that might cause someone to question your impartiality in serving as a reviewer for this competition?”

In other words, ED would try to preserve an escape hatch here for itself in case those “other circumstances” might reach the attention of the public or the media.

Another example of the ignorance-is-bliss ethical screening strategy involves information submitted by potential panelists. These folks provided ED with resumes that one might assume would include information that could flag some potential conflicts of interest. The only problem—ED did not bother to review the resumes. Why? First, because they already knew who they would allow on the panels, and secondly, because not knowing about conflicts of interest would provide an ethical fig leaf just in case someone got nosy:

The Department did not review the resumes as part of the conflict of interest screening process. We reviewed the resumes of 25 of the approved panelists and identified six panelists whose resumes revealed significant professional connections to a teaching methodology that requires the use of a specific reading program. The Department did not identify any of these connections in its conflict of interest screening process; therefore, it would not have been in a position to deal with the potential conflict raised by these professional connections should a State have included this program in its application (pp.7-8).

In other words, the crooks, charlatans, and hacks running ED knew exactly what they did not need to know. The only way to find out what ED (Doherty, Neuman, Hickok, Paige, Spellings) really knew is to have them testify under oath in, let’s say, a court of law.
at 8:59 AM