NCLB and the Invisible Storm

Einstein defined insanity as doing the same thing over and over again and expecting different results. By this definition, the current testing insanity is aptly labeled, particularly in poverty areas like Washington, DC. Instead of acknowledging poverty as the chief source of the achievement gap and working to do something about it, D.C. officials have come up with a new test that is tougher than the old test that the poor kids were, surprise-surprise, failing before.

Even the KIPPsters and other charters, the much-vaunted solution to failed public schools, took a dive with the new test--even though charter scores are being withheld for the time being. (Is it to give time for the hired guns at the Fordham Foundation to devise a rebuttal that will protect the sacredness of the charter cause--work hard, be nice?)

What solution have DC officials come up with to counter the spread of failure? What else--more of the same thing that didn't work before:

Janey said the system has hired a company to retrain teachers and provide academic enrichment programs for students. The system is planning to hold year-round classes at five schools and experiment with innovative ideas at 20 others. In the next few weeks, Janey will send letters to parents at the 118 schools giving them options to transfer to the 28 schools that made adequate yearly progress. Although in the past tens of thousands of students qualified for the transfer, only about 250 did so.

In the meantime other urban school districts are hemorrhaging students, who are taking advantage of vouchers or charters. A story this week from Toledo, for instance, shows TPS lost 1,200 students based on first day enrollments. They have lost over 5,000 students since 2003.

Now if these public school students were finding school choices that offered them better educations, then we would at least have something to debate. The sad fact is that most of these kids, whether Toledo or Washingtonm, are being placed into educational workhouses that offer no academic advantage, but, rather, miseducative and crushing behavioral training that threatens the psychological well-being of a generation of youngsters. Kozol calls it "cognitive decapitation"--the Business Roundtable calls it "rigorous standards."

Whatever you call it, the effects are the same, as is the cause. When NCLB decided to use school assessments as a way to push open the door to privatization measures, the steamroller was set in motion. I know, too, that there are some feint of heart or just plain stubborn who still do not believe that our leaders could be so cynical and jaded as use and damage children in order to advance an ideological agenda. Here is one example from Elizabeth Debray's book that shows that guaranteed failure was the designed outcome, while helping poor children was the avowed outcome. 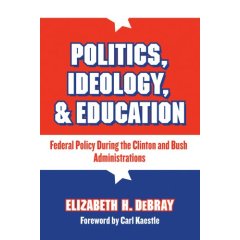 Let me give you just one example from Elizabeth Debray's book. In the Spring of 2001, work to find a compromise on the school voucher issue was at a fever pitch, with Sandy Kress working overtime between legislative committees and Rove's inner circle. When it became obvious to conservatives that a continued insistence on the inclusion of vouchers would preclude Democratic support of NCLB, Senator Judd Gregg (the White House's inside man in the Senate) introduced, as a compromise, a plan to require some Title One funds to pay for out-of-school tutoring (supplemental services) for children from schools that failed to make AYP.

Conservatives were angry and disappointed that school vouchers had once more been stripped out, but Gregg and others remained optimistic that in subsequent reauthorization of NCLB in 2007, vouchers would be an easier sell based on the private tutoring precedent and the anticipated failure rates on state assessments. The failure rates would provide the documentation to soften, and eventually eliminate, public resistance to school vouchers and private management companies. Debray quotes a Senate aide, who preferred to remain anonymous, on Gregg’s selling of the supplemental services compromise in March 2001:

“[Senator] Gregg was explaining why they [other Republican senators] should vote for the bill . . .and he said, ‘Well, the supplemental services are a foot under the door for vouchers. They’re going to show that these schools aren’t working properly, and we’ll finally be able to show that the schools aren’t doing well. The assessments are going to prove the same thing (p. 96).’”

Now we find, predictably, the Business Roundtable and the U.S. Chamber of Commerce ginning up the rhetoric to hold the line on standards as we move toward the NCLB reauthorization discussion. "Standards" have become code for impossible and racist AYP requirements, which offer the straight and open canal to the corporatizing of American schools--beginning in the urban centers. Never mind that the waters and the banks are strewn with the bodies of America's most vulnerable children, and never mind that the serious drowning is just getting underway, and never mind that the water is still rising.
at 8:20 AM