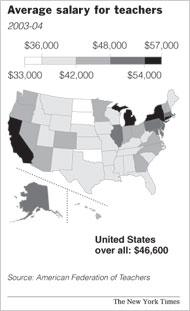 The CEOs of America have been reliable and vocal critics in the continuing demonization of American teachers and schools. The corporate bean counters have always believed that it is the work of the schools and teachers to churn out a reliable stream of passive and unquestioning drones whose cognitive incapacitation in schools will prepare them to unerringly accept their own sacrificial leap into the capitalist crucible.

For these corporate elites, the KIPPsters motto of "Work Hard, Be Nice" says it all in terms of training future workers--and it is no surprise that the KIPP charter chain gangs, with unpaid overtime beginning in 3rd grade, should become embraced by corporate America as the preferred model for working class schools in America.

For today's obscenely-paid corporate princes, the global marketplace demands that American workers should be forced down to Third World standards, rather than aspiring to raise up the economically-oppressed of those countries toward Western standards.

On this Labor Day Weekend, then, let us pause to consider this point made in today's Times:

Enough already on how many millions this or that chief executive earns, how many stock options are tossed around to keep the Champagne flowing, the McMansion dusted, the Bentley polished.

As a little back-to-school thought, let’s shift gears to a group of workers who earn pennies in comparison but who, it could be argued, play at least as vital a role in society. It is teachers, after all, who try to make sure that those captains of industry have educated workers.

According to the American Federation of Teachers, the state with the highest average pay for teachers in 2003-04 was Connecticut, at $56,516; the lowest was South Dakota, at $33,236.

Or look at it this way: Pick a corporate chieftain — say, Jeffrey R. Immelt of General Electric. He earns $15.4 million a year. Every single day — including Thanksgiving and Christmas — he makes almost what the average teacher does for a year of taming wild children, staying up nights planning lessons, and, really, helping to shape a generation.