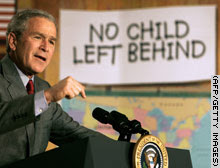 Tonight the SOTU Speech will give the Decider an opportunity to change the subject from his foreign war that he would rather forget to the domestic one that he is now eager to wage with new vigor: the war against public education. He will use this event tonight to urge bipartisan support for an escalation, er, surge in testing, a bold (read reckless) plan to lay down a endless blanket of incendiaries from kindergarten through 12th grade.

Sure, there will be some naysayers who tell you that the current testing war is not working any better than the one that the Escalator would rather forget. The achievement gap, for instance, remains a chasm, and test scores in reading and math have been less during the past four years (based on NAEP) than they were in the previous four. Not only that, but the troops in the classroom are demoralized and ready to desert for being blamed with the failure, and the tutoring companies and the corporate welfare charter outfits (the Blackwaters of the edu-world) complain about a shortage of contracts.

What the whining naysayers don't realize, however, is the testing war, the war on public education, is being won. For complete victory, it is just going to require a determined effort to re-arm and re-deploy the NCLB weapon that will assure the demise of the enemy. Just look, for instance, at the growing number of schools in every state of the nation that have already been neutralized by AYP scores that don't pass muster. And just look at the projections that show 70-90 percent of all public schools being taken down, taken out, by 2014, if we have the guts to stay the course, er, to adapt and adjust. Now is not the time to waver in our commitment to crushing the dictatorial government schools. We have the voucher reinforcements ready to pull the trigger on their front, and we have General Marc Tucker ready to launch a full-scale charter assault in his theatre of operations. All we need is the determination to not cut and run. We need to buck up, suck it up, bite the bullet--we need to Reauthorize NCLB Now!!
at 7:35 AM