Using NCLB to "Incentivize" "Voluntary" National Standards Based on NAEP

There are more details today on Senator Dudd's "post-partisan" participation in the New America Foundation's plans for national, or is that international, education standards. (By the way, Petrilli sits on the Board of this august "think tank.") I say "international" because there is nothing in the rationale for these standards that would link them particularly to what historically has been American goals or American purposes for education.

Coming from the New America Foundation, which is a self-proclaimed “post-partisan” non-profit think tank, we can assume, in fact, that the purpose and aims of education under this new plan are to be “post-partisan” as well. As we can see below, these are standards that may be just as applicable in Springfield, Illinois as they are Pyongyang, North Korea or Beijing, China. Gone are the messy, controversial, and time-consuming rationales of preserving and expanding our democratic way of life, or civic commitments or equality among peoples, or human rights and social equity. Well, we know that time is money, and economic competitiveness is what these national standards are all about. If we are going to gut punch the rest of the world during this foundational stage of the new century, then we need citizen-workers with that goal in mind.

So here is the rationale for the un-American education standards set forth in The Standards to Provide Educational Achievement for All Kids (SPEAK) Act (pdf):


I guess this is what “the world is flat” really means.

And here is what the "post-partisan" Bill does, or what it wants to do:
So let’s see—these national standards will be adopted only voluntarily by the states, right? For instance, you, Utah or Virginia, you don’t have to join up here. You can go your own way and stick with your own standards, thus foregoing all the millions in “incentivizing” bonuses that would have come your with your “voluntary” adoption, just as you may forego the extension for meeting Maggie’s impossible 2014 deadline that is looming—you know, the deadline you don’t have chance in hell of meeting without the extension that you just turned down. So have fun, South Dakota and Virginia--see you around. Voluntary? Just as voluntary as all kids in urban and rural poverty who voluntarily join the Army as their only route to a college education. 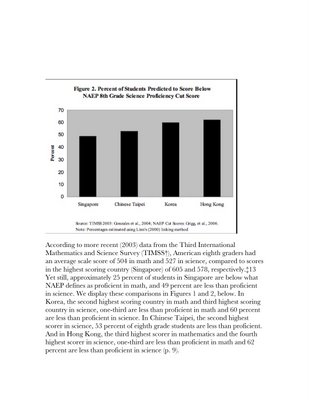 The NAEP business--we all saw this one coming as a way to continue the accountability intimidation indefinitely. It would appear, in fact, that if the rest of the world adopted NAEP as a standard, then everyone could be held hostage to accountability pressures that no one could meet. Just one example is provided in the chart and text at left (click to enlarge) from a paper by Richard Rothstein, Rebecca Jacobsen, and Tamara Wilder that was delivered at Columbia University November 16. The impossible cut scores, which have long been considered a bad joke by the psychometric folks, would make it impossible for even the most repressive educational regimes (the ones we want to emulate) to meet.

Finally, here is the soothing conclusion to Presidential "Contender" Dodd's speech at Monday's at the announcement of the new educational "way forward":

With core standards, America can begin the work of regaining its competitive edge in the global economy. And in the life of every student, equality will be made a little more real, as the skills and knowledge we expect of them are no longer made contingent on the accident of birth or residence.

High standards—American standards—have the potential to accomplish all of that. Their power can be enormous—as John Cole, the president of the Texas Federation of Teachers, once illustrated with a little story.

Apparently he had read that his favorite running back, Emmitt Smith, was asking for a $13 million contract from the Dallas Cowboys. So Cole immediately wrote a letter: “Dear Dallas Cowboys: I would gladly serve as your running back for just one hundredth of Emmitt Smith’s salary. Please let me know.”


Amazingly, he never heard back; and he asked himself why the Cowboys would pay $13 million for a running back when they could have had someone play the same position for just $100,000. “The answer,” he decided, “has to do with keeping score. If you don’t keep score, quality really doesn’t matter.” Unfortunately for John Cole, football teams keep score.

And unfortunately for our students, American education doesn’t—not in any consistent, comparable, competitive way. With your hard work, that’s going to change very soon.

Start keeping score—start holding America’s children to the same high standards—and we might be amazed at the excellence that follows, for our economy, for our security, for our parents, and for our children.