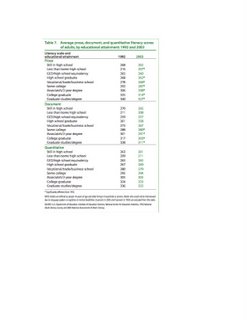 Bruce Fuller is a smart guy--and one I respect. He does a good job in this commentary deconstructing the do-gooder talk by the elites of non-elitism like Nancy Pelosi, who is offering an education assistance plan to make it easier for Caitlin and Seth to go to Cal Tech at taxpayer expense--while neglecting to do anything significant to help those who need the most help.

Fuller, however, goes over the deep end with this gem:

The nation's literacy rate is now in decline, dragged down by youths who acquire few skills in mediocre high schools, who come to feel little stake in civil society. So, American firms move overseas, ironically spurring upward mobility for graduates in Bangkok and Bangalore, rather than in Daly City and Des Moines.

Can Fuller, a real researcher, believe this simplistic crap? First, does he not know that literacy rates (click to enlarge) have been in decline since 1992 for all segments of the population--high school grads, MIT grads, or middle school dropouts? Most importantly, though, does Professor Fuller really believe that corporations have been exporting jobs for the past 15 years because American high schools are bad, or because there is a shortage of talented and trained workers here? Has he been drinking the Kool-Aid offered him by the Business Roundtable?