Saving the Wars on Iraq and on Public Education 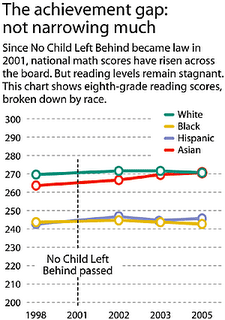 (Chart at left from The Christian Science Monitor)

It's going to be another big week for the Decider. Not only will he be going before a hostile public to advocate for an escalation of his War, but he will meet with Miller and Kennedy this morning to charm his way toward a new surge in the continued war on the poor and on the public education system in our country. It comes just in time to mark the five-year anniversary of the most reckless, destructive and utterly failed education policy ever. Let's take a little accounting of how NCLB is accomplishing its goals as set out in 2002:

Performance Goal 1: By 2013-2014, all students will reach high standards, at a minimum attaining proficiency or better in reading/language arts and mathematics.

Reality 1: The most significant form of educational growth is the alarming increases in the number of schools not making AYP (adequate yearly progress) toward the impossible goal of 100% proficiency. In Massachusetts and Connecticut, for instance, where public schools are the strongest, the NCLB-mandated failure in reaching beyond the impoverished urban schools and into suburban enclaves. 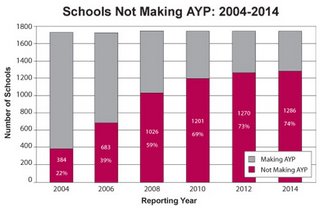 Here is a chart from a study commissioned in Massachusetts (click to enlarge) that shows 74% of their schools failing to make AYP by 2014. If ED has its way, of course, these schools will have been turned in corporate welfare charter schools by then.

Performance Goal 2: All limited English proficient students will become proficient in English and reach high academic standards, at a minimum attaining proficiency or better in reading/language arts and mathematics.

Reality 2: If most people know that 100% proficiency is impossible for native speakers, 100% of people know that English-language learners and special ed. students are not going to become 100% proficient. The insanity of this goal clearly demonstrates the built-in failure that will not, cannot, be overcome, regardless of all the wishful thinking by the likes of Kati Haycock and Amy Wilkins at Ed Trust.

Performance Goal 3: By 2005-2006, all students will be taught by highly qualified teachers.

The attempted implementation of this goal has caused more grief and confusion and resignations than most could have imagined in 2001. On the one hand, higher standards would seem to guarantee more qualified teachers. This could have been the case if not for the overriding ideological commitment to bypass schools of education in creating a teacher corps is "highly-qualified." 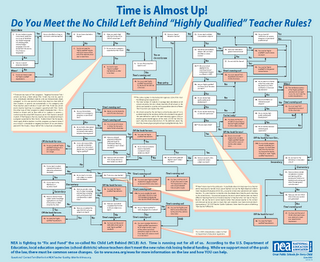 Performance Goal 4: All students will be educated in learning environments that are safe, drug-free, and conducive to learning.

In terms of safety, here are the key findings from the latest (2004) School Safety Survey conducted by the National Association of School Resource Officers (NASRO):

More than 55% of the school officers stated that teachers, administrators, and support staff (secretaries, custodians, etc.) do not receive ongoing professional development training on school security and emergency preparedness issues.

Over 65% of the SROs stated that school bus drivers and other school transportation personnel have not received training during the past three years on issues related to security measures, emergency planning and response, terrorism, and associated topics.
Nearly 86% of respondents indicated that the number of crimes that occur on school campuses nationwide are underreported to law enforcement.

Over 70% of the surveyed school officers indicated that funding for school safety in their districts is either decreasing or remaining the same.

Only 15% of respondents reported an increase in safe schools funding.

Performance Goal 5: All students will graduate from high school. 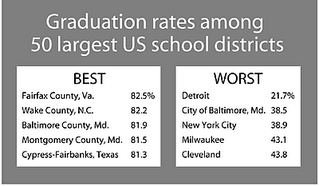 In June 2006 the Christian Science Monitor reported on a new study funded by the Gates Foundation that showed a dropout epidemic in American high schools. The Administration's solution: increased testing in high school.

In the meantime, high schools have survived repeated attempts by the Administration to eviscerate vocational education, proposing in 2006 to simply eliminate all vocational education programs. The Administration is pushing, too, for more testing in high schools under the perverse rationale that testing will improve high schools and improve dropout rates, when the evidence points to the contrary. The 10 states, in fact, with the lowest graduation rates all have high school exit exams, and 9 of them have had exit exams for more than 10 years: