Before Bush II came to Washington with his Texas Mirage (TAAS) that would become the Nation’s Nightmare (NCLB), the Dems owned the education issue. In large part it was due to the work of another Texan, LBJ, whose policies eventually brought us face to face with the liberal (as in Enlightenment) delusion that for every social or economic problem, there is a schooling solution. That we continue to embrace the delusion is clearly evident in the continuing acceptance of a Bush education policy purportedly aimed at helping a minority population whose support for him has never climbed into double digits.

Notwithstanding a continuing widespread blindness to the real Bush agenda among white voters, it is with a heightened sense of incredulity that we are subjected to another round of the threadbare platitudes about not leaving minority children behind, platitudes that are cynically used as they have been from the start to disguise the conservatives' real agenda of crushing public schools while continuing to subjugate the poor. In this new push for the conservatives' privatization scheme, the focus has subtly shifted from saving poor children by closing the achievement gap in the public schools to now saving poor children by giving them $4,000 to escape into either Christian fundamentalist madrasahs or the Big Lots version of secular private schools. Oh yes, one other Spellings option: Chain-gang charters (the Tucker Solution) that have been demonstrated by her own "scientifically-based" research to be no better, or even worse, than the public schools she would replace. No matter--the charter solution is at least cheaper to run with no messy collective bargaining units to deal with and no prying eyes from publicly-elected school boards. 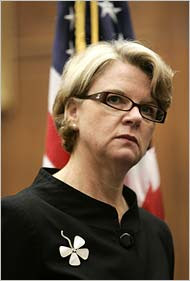 From the Tribunein Chicago, where Spellings was yesterday trying to remedy that elusive 1% of non-perfection that continues to plague her almost pure plan:

"For the promise of No Child Left Behind to be real, we must provide more vigorous and robust tools to address the chronic underperformers," Spellings said. "We cannot have kids trapped in these schools year after year after year."

What do African-Americans think of Bush's new plan to free their children by giving them a handout big enough to choose their own correctional testing facilities? Here is must-read commentary from New America Media:

EDITOR'S NOTE: President George W. Bush is asking Congress to reauthorize the No Child Left Behind Act, but the act has failed to deliver on its promise, writes Donal Brown, a New America Media reporter who taught for 35 years in California's public schools.

President George W. Bush is asking Congress to re-enact the No Child Left Behind Act even though the act has failed to significantly boost the performance of under-achieving students.

Calling the NCLB a "good law" during the State of the Union address, the president ignored the criticisms of those in the educational trenches.

NCLB began auspiciously with the right emphasis on enabling urban students to improve their school performance. It provided a frame for establishing high standards for all students and making schools responsible for student progress.

But for all its good intentions, the law has created huge problems for educators, students and parents, and has failed to deliver in crucial areas.

At the onset, NCLB was never funded properly. There was no money provided to transfer students out of under-performing schools. In Chicago, 2,000 students needed to transfer, but had no place to go.

In a feeble attempt at a remedy, once again the Bush administration is playing the voucher card. In his speech, Bush said he wants to enable "children stuck in failing schools the right to choose some place better."

The Department of Education reauthorization plan allocates $4,000 scholarships for students to attend private, other public or out-of-district public schools. This does not address the problem that in many cities, there are simply no schools in which to use the scholarships. Private schools are exclusive and are not likely to accept large numbers of under-performing students from public schools. The tuition of the best private schools can range from four to seven times that of the scholarship money. And there is no sign that suburban schools with high performing students are lining up to accept these students, either.

So far, the transfer aspect of NCLB is a failure. In 2005, nationwide, only 1 percent of eligible students chose to transfer. Critics also question spending money on busing students when funds are needed to hire better teachers, improve instruction and provide books and computers.

Notwithstanding the need to establish stronger benchmarks for success, the testing regime established by NCLB has delivered no more than minimal results.

In his speech, Bush cited the progress minority children had made in closing the testing score gap between them and other students. Fact-checkers working after the speech and others say that Bush's claim that NCLB is closing the gap is exaggerated.

Results from the National Assessment of Educational Progress in 2005 indicated that the reading scores for fourth grade Asian, Hispanic and black students went up modestly. Native American scores went down. For the eighth grade, scores for all groups except Asians went down. The achievement gap between black and white students from 2002 to 2005 widened a bit.

Professor W. Norton Grubb of the University of California at Berkeley, who has extensive experience in urban schools, thinks it is too early to make any claims for NCLB. He says that any rise in scores can be characterized as one-time improvements from students getting used to testing and teachers teaching to the test.

For sure, teachers around the country are reeling under the weight of a testing regime. Some out of desperation are resorting to deadly drills that sap the spirit of students and deaden the joy of learning.

The Bush plan to reauthorize NCLB calls for more funding for tutoring that was not funded under the original act. The reauthorization funds tutoring for disabled and limited English proficiency students. Unfortunately, there are legions of other students who need tutoring.

Urban districts strapped for funds have found it impossible to provide qualified tutors. Grubb said districts that do provide tutoring often hire untrained college students unfamiliar with students' needs or how to help them. He said that a program called Reading Recovery was effective using one-to-one or small group tutoring by highly trained tutors.

The list goes on. The reauthorization plan is woefully inadequate in addressing the need for more and better-trained teachers. The plan wants to improve teaching by rewarding effective teachers, but only offers "resources" to interested states and districts rather than funding.

That will do little to provide excellent teachers for the most difficult students to teach. Harnessed with poor teaching conditions, unruly students and inadequate training, teachers do not last. There should be more federal money going directly for salaries and training for those teachers willing to take jobs in schools with vast numbers of under-performing students.

It is unlikely that the Bush administration will make significant outlays for education. The war in Iraq and tax cuts for the rich have depleted the treasury, and now that the Democrats rule Congress, Bush has forsaken the route of deficit spending and is trumpeting the virtues of a balanced budget.

Yet there is no more important challenge facing the nation than turning out, in Bush's words, "a public with knowledge and character." It will take more than a warmed-over NCLB to meet that challenge.