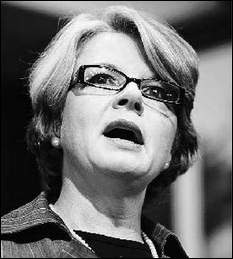 Spellings is on tour once more, this time to tout the Bush Co. alternative to public high schools: for profit or non-profit, privately-managed charter high schools that use tax money to fund them. The non-profit variety is increasingly popular, because with it, corporations can received tax breaks for money contributed to the charter fundraisers to shut down public education.

And if states have caps on the number of charter schools allowed? Easy--just ignore the law. Never mind that there is no empirical research to show that these ED-supported alternatives are any better than the publics they are intended to replace. Obviously, the Decider has decided once again, and who will dare stand in his way. The evidence will now be manufactured to support the decision:

The day after the Bush administration unveiled its most detailed plans yet for renewing the No Child Left Behind Act, Secretary of Education Margaret Spellings selected a charter high school here as the first stop in a campaign to sell a plan that includes expanding the role of charter schools and revamping high school instruction.

“People ask me, ‘Is No Child Left Behind possible?’ And I say yes, it’s absolutely possible. And people say where is that happening, and I say right here at Noble Street,” Secretary Spellings said on Jan. 25 at a student assembly at Noble Street Charter High School, which was founded under a charter from the Chicago school board. It was her first school visit after Mr. Bush’s Jan. 23 State of the Union address. “I am very encouraged by the innovation that’s going on here. … We need to open up more charter schools where they are needed.”

The administration’s plan would make it easier for districts to turn faltering regular public schools into charters. The administration said it would support local decisions to reopen schools identified as needing improvement under the No Child Left Behind law as charters, even if state law limits the number of those independent public schools. . . .