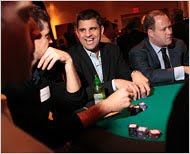 (Photo by Nicholas Roberts for The New York Times)

With unrestrained Wall Street greed having devoured the American economy and most of the Wall Street monster's own appendages, new opportunities for casino capitalitsts to cash in are much harder to come by. With encouragement, however, from the Oligarchs who run the U. S. Department of Education, a new gold mine has opened up in the lucrative corporate charter movement, with big opportunities for vulture philanthropists to collect huge tax credits, for charter real estate dealers, bond bundlers and investors, and for charter school management corporations, which are paid millions from tax dollars meant for public education. Happy Days are here again, as reported in a story today in the Times.
What impressed me about the story was not its predictably sychophantic coverage on this new sub-species of corporate bloodsucker, but, rather, the fact that the New York Times has finally mentioned the Stanford charter school study that has so effectively exposed the truth about the vaunted charter school solution:
How did the Times report the Stanford study after 6 months of ignoring the biggest charter story of the year? Only by giving the Hoxby hoax top billing and with no facts or analysis of that "suggestive" CREDO study. Stunning:

Whether charters do a better job of educating children, even with the extra help from private donors, is much debated. A study released in September by researchers headed by Caroline M. Hoxby, an economist at Stanford who is a fellow at the Hoover Institution, concluded that on average New York City charters outperform local schools. But another study by a different group of Stanford researchers last summer suggested that nationally the numbers are muddier.