As a result of President Roosevelt issuing an executive order in 1941 to forbid discrimination in defense industry hiring, huge numbers of African-Americans moved to Detroit to work in industrial and manufacturing jobs that had been only pipe dreams until that time. To contain the influx of blacks, however, within the restricted boundaries of the City of Detroit, racist leaders used residential redlining, "restrictive covenants, white preferences, and discrimination by real estate brokers" to assure the separation of the races (Grant, 2009, p. 146). Detroit's black population grew from 4 percent in 1930 to 40 percent in 1970, even as the leafy suburbs surrounding Detroit blossomed and flowered, thanks to VA and FHA policies that advocated for the creation racially and economically "harmonious" neighborhoods, i. e., whites only. 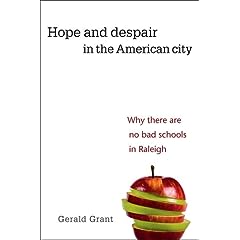 In 1971 the NAACP legal team sued the City of Detroit for its ongoing history of deliberate policies to create and maintain apartheid housing, as well as segregation of the public schools. The NAACP's most recent evidence was the City's nullifying of a school integration plan in 1971. Federal District Court Judge Stephen Roth, a conservative Democrat, ruled in favor of the NAACP. Here is part of Judge Roth's opinion, as quoted by Grant (2009):

The city of Detroit is a community generally divided by racial lines. Residential segregation within the city and throughout the large metropolitan area is substantial, pervasive and of long standing. Black citizens are located in separate and distinct areas within the city and are not generally to be found in the suburbs. While the racially unrestricted choice of black persons and economic factors may have played some part in the development of this pattern of residential segregation, it is, in the main, the result of past and present practices and customs of racial discrimination, both public and private, which have and do restrict the housing opportunities of black people. On the record, there can be no other finding (p. 146).

Judge Roth's decision was upheld by a three-judge federal Appeals panel, and after the State of Michigan joined Detroit in a further appeal, a full federal Appeals Court affirmed Judge Roth.

In 1974 the U. S. Supreme Court, stacked with Nixon's three new picks who had passed his anti-integration litmus test (see pp. 150-156 of Hope and despair in the American city: Why there are no bad schools in Raleigh), reversed the three previous legal conclusions by the lower courts to strike down, in a 5-4 decision (Milliken v. Bradley), a new Detroit desegregation plan that sought to remedy generations of racist policies, both public and private.

Some school systems pushed on with efforts to desegregate schools, and Wake County, North Carolina was one of them. In 1976, the city and county consolidated their school systems and created a pie-chart configuration of districts that assured that each district got some urban children, with no school getting more than 40 percent minority. In later years, when it became apparent that the Reagan and Bush Courts would put the final nails into the coffin of Brown v. Board of Education, Wake County began to focus desegregation efforts by economic status, rather than skin color. They opened many magnet schools, which attracted large numbers of suburban children to choose schools in the city. And they focused on a culture of excellence and equity, that extended to every child. They recruited teachers and principals who wanted to teach in diverse schools, and they gave big bonuses for National Board certification. Test scores soared, and achievement gaps narrowed. Today there are no bad schools in Raleigh.

All of this makes the Business Roundtable, conservative racists, and the Oligarchs in charge of the U. S. Department of Education very nervous, for if this model of diverse, excellent public schools can be spread to other municipalities, then not only will public education be saved and transformed, but white privilege will be further challenged, desegregation will become a reality, and the apartheid corporate charter industry will go bust. That is why the Republican Party is spending big bucks in North Carolina to get their functionary toadies elected. The most recent election shows the conservatives now with a 5-4 majority on the Wake County School Board. The dismantling of successful economic integration in the public schools is the top priority, as the following piece makes clear. Will this be another Milliken v. Bradley?


WAKE COUNTY (WTVD) -- A large crowd showed up at Tuesday's Wake County School Board meeting as the debate over proposals supported by the new majority of the board intensified.

It turned out that the school board member who introduced the proposal to change mandatory year-round schools decided to withdraw the motion Tuesday, but not before getting an earful from dozens of parents.

Board members listened to public comments for several hours on changing the diversity policy and ending mandatory year-round schools.

"Diversity is not a policy of convenience," student George Ramsey said. "It is a policy of necessity."

Most of the 70 people who signed up to talk seemed to be at odds with the new majority, and asked them to re-consider their proposed changes.

Some went as far as claiming that those changes would lead to re-segregation of the schools.

"Where's the plan," opposer Gary Disnukes said. "Where's the budget. I urge this board to take a step back and not be in a rush to fulfill campaign promises before all ramifications of these promises are understood."

A minority of those present, however, did offer the board support.

"My hope would be for the opposition to embrace the new school board members ... improve the graduation rates and overall academic achievement for our children," supporter Judy Gladden said.

Board members later decided not to take a controversial vote at the end of the meeting.

The school board plans to come up with questions to send out in a survey to parents and make decisions based on their feedback.

The cost of doing the survey ranges from a few thousand to as much as $144,000 depending on how it's conducted.

The board wants responses back by March, so it can work out the school calendar.

Meanwhile, the NAACP is asking the school board for 45 minutes to present some of their concerns at next month's meeting.

The NAACP says it is worried policy changes could essentially re-segregate the school system.