RTTT, the Borg, and the Beehive 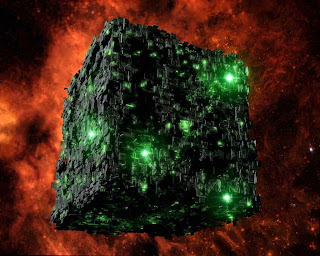 The Edu-Oligarchs, led by Gates, Broad, and the Waltons, are pushing states hard to get them in on the 4.35 billion-dollar pettifogging bribery scheme and fund-funneling frenzy of Duncan's Race Over the Top (ROTT). Not only have the Bold Deformers laid out the race course and named the judges, but they are now in the process of training the race entrants and creating the betting form with their own handicapping. Nothing is being left to chance in this race. Resistance is futile.

The New Teacher Project, an outfit funded by Gates and the Feds to undercut teacher unions and professionalism, is in charge of the betting and handicapping. NTP is where Michelle Rhee cut her fangs, and they put Louisiana and Florida as the heads-on favorites. Louisiana, first to use standardized tests to make or break 4th graders, has already adopted pay-per-score and is now evaluating their teacher preparation programs based on test scores. Florida is a leader in corporate charters, a pioneer in corporate voucher programs, and a stalwart in the promotion of year-round high-stakes testing. (Florida and Louisiana rank 36th and 45th in education attainment, respectively, and both rank among the top 10 states with the highest percentages of high school dropouts.)

Sam Dillon captures the excitement for the NYTimes:

. . . .One of the most time-consuming tasks has been lining up written statements of support signed by superintendents and other officials in every school district that would receive grant money. California alone has about 1,000 districts, so getting the word out to each of them and cajoling their local leaders to send in signed agreements has taken much of Mr. Miller’s time, he said.

“It’s what I do every day — I’ve talked to four superintendents this morning,” Mr. Miller said by telephone. He thought a moment, then added: “Sorry, I’ve got to get off the phone. I’m wasting time — you’re killing me with all these questions!”

Illinois has 870 school districts, said Darren Reisberg, a deputy superintendent at the Illinois State Board of Education, so he, too, along with the state superintendent, Christopher Koch, has been talking up Illinois’ proposal with officials in hundreds of districts.

“That’s something Dr. Koch and I are doing just about every day, all day,” Mr. Reisberg said.

Competition for the federal grants is especially intense because state budgets are distressed and awards for states the size of Illinois could be $400 million. Several nonprofit organizations have handicapped states’ chances in the competition. The nonprofit New Teacher Project, for instance, months ago rated Illinois as “somewhat competitive.” Florida and Louisiana were the only two states the project rated as “highly competitive.”

Florida officials say they know they have a shot at the prize money. “But our commissioner has directed us to pretend that we’re not even hearing that,” said Holly Edenfield, an executive director at the Florida Department of Education who is coordinating work to prepare the state’s proposal. She has not calculated how many hours she and her colleagues have logged so far.

“We just know our effort is immense and time-consuming,” Ms. Edenfield said.

The Florida department headquarters in Tallahassee has become a 17-story beehive of Race to the Top activity, said Tom Butler, a spokesman.

“Every time I ride the elevator in the morning, and every time I leave at night, there’s a common conversation about Race to the Top that you can have with any of the 1,000 people who work here,” Mr. Butler said, “because every person is involved.”