What Does Arne Duncan Know About Carol Spizzirri, And When Did He Know It?

Huffington Post just lost a last great post by Jerry Bracey, submitted posthumously by Susan Ohanian. Seems HuffPo will put up any meaningless mush by Tom (Elwood Blues) Van der Ark, but when there is real story about a real neolib icon like Arne, well, not so much.

Note by Susan Ohanian: Jerry Bracey had just finished this column when he died on Oct. 20. He had planned to release it at his Huffington Post blog on Halloween. Hence the rattling skeletons theme. I found out about it and posted it at my Huffington Post spot on Nov. 18, where it still waits "approval" by the Chicago editor. 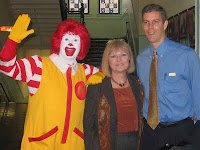 The Skeleton in Arne Duncan's Closet

Halloween season is an appropriate time to talk about rattling skeletons in the closet. US Secretary of Education Arne Duncan appears to have a noisy one dating from his years running the Chicago Public Schools.

Her name is Carol J. Spizzirri.

Spizzirri (pdf) is a convicted shoplifter. According to a sworn affidavit by her ex-husband, a court ordered psychological evaluation (pdf) diagnosed her as a paranoid schizophrenic and pathological liar. Spizzirri claimed to be a registered nurse and a renal specialist. Her alma mater, now defunct, denied giving her an RN and reportedly she has never been a registered nurse in either Wisconsin or Illinois, as she had claimed. One of her daughters filed a protective order against because of alleged abuse.

This same daughter died in a car crash in 1992 after which Spizzirri started the nonprofit Save-a-Life Foundation (SALF) whose charter was to teach first aid skills like CPR and the Heimlich maneuver to school children using EMTs and firemen as in-class trainers. According to Spizzirri, her daughter was the victim of a hit-and-run driver and bled to death because the ambulance took a half hour to reach the scene and no one at the scene knew how to stanch the flow of blood. Spizzirri claimed her mother's grief motivated her to start the foundation which attracted political and financial support, including about $9 million in IL state and federal dollars. Famed doctors Peter Safar (who developed CPR) and Henry J. Heimlich (known for the maneuver) served on SALF's medical advisory board.

But official records indicate that the daughter's alcohol level was twice the legal limit, that she flipped the car, and died a half hour after reaching a hospital. Confronted with these facts by Chicago TV investigative reporter Chuck Goudie in 2006, Spizzirri terminated the interview and stomped off the set. Over the next year, Goudie did another three reports raising more questions about SALF.

Those stories appear to have been the first time a Chicago reporter did any fact checking about the foundation. For instance, in an uncritical 2002 Sun-Times article, Spizzirri claimed that her foundation trained 400,000 Illinois school children in 2001 alone. Do the math. In a 180-day school year, that's 2,222 children per day.

During his years as CPS big dog, Arne Duncan was apparently close to Spizzirri. He was a featured speaker at a 2003 SALF conference and a 2006 press statement has him receiving a SALF "Sponsorship Award" from Spizzirri, his second such prize. Duncan is quoted saying, "Carol is one of my heroes. I really appreciate the partnership." Duncan even appeared as an animated pitchman on SALF's website, cheerily hyping kids on the program: "Hi, friend, I'm Arne Duncan ... Ask your school teacher today if the 'SALF-Town' heroes can visit you!"

Before she huffed out of the interview with Chuck Goudie, Spizzirri said SALF trained 67,000 Chicago Public School (CPS) children in first aid the year before and that the training was free to the children. In fact, records show that CPS paid the foundation a considerable amount.

After Goudie's reports, Spizzirri filed a defamation suit against three people who criticized SALF (including Dr. Heimlich's son), claiming the criticisms cost it 11 contracts, including CPS. But the lawsuit resulted in only more scrutiny. For example, in response to a subpoena from the defendants' lawyer for all their SALF records, CPS produced a grand total of 19 invoices from 2000-2007 totaling $12,855.

Three more invoices from 2004/2005 -- which CPS failed to provide to the defendants' attorney -- have since turned up via a public records request. The first 19 invoices produced by the subpoena appear to have gone through regular CPS payroll. But the three later invoices, totaling $49,000, were processed and signed off by CEO Arne Duncan's office. One includes this handwritten notation: "per AD per Ann Whalen 9-14-05." Whalen was Duncan's personal assistant. She now works for him in Washington (see docs here).

The $49,000 was for "training elementary school students in life supporting first aid skills which will take place in approximately 15 schools with approximately 2,400 students." But the subpoena to CPS didn't produce any records showing the training ever happened.

What about all those CPS students allegedly trained by SALF? If you train 67,000 children in a single year and there are, let's say, 25 children per session, that's 2,680 sessions, 15 per day if evenly distributed across a 180-day school year. As any overworked administrator can testify, that's likely to produce a mountain of paper work -- work orders, reports, employment records, evaluations, etc. Twenty-two invoices over a seven year period do not a mountain make.

On July 9, a federal judge in Chicago granted SALF's request for voluntary dismissal and the lawsuit was dropped. A few months later, SALF filed dissolution papers with the Illinois Secretary of State's Office. But questions remain about the organization's 16-year history, their funding, and their relationships with powerful public officials -- including Arne Duncan.

Why did CPS pay SALF over $60,000 for a "free" program? What happened to the more than $1,000,000 SALF received from the US Centers for Disease Control and Prevention for one year (there were other CDC contracts)? What about the millions SALF received from Illinois taxpayers? In the case of the Illinois State Board of Education, it's a guessing game. ISBE's complete records consist of a form showing a disbursement of $600,000 to SALF -- no application, no review, no evaluation, no nothin'.

According to an Oct. 11 Chicago Tribune article, "[Spizzirri] estimates 2 million children took the classes, many of them from the Chicago Public Schools ... City school officials did not respond to inquiries about how many students received emergency training."

Looks like this tale is so spooky that CPS won't even talk about it to a reporter. But the public may feel entitled to know whether their money went for tricks or treats. For example, the $60,000+ CPS gave SALF was apparently spent on first aid training for hundreds of thousands of ghosts. I'd say it's time to knock on the door of someone who can get to the bottom of this money mystery. He lives in that big house down at the end of the street, the one marked, "Secretary of Education."