Here's a glimpse into what is going on in Philadelphia and all over the country, from coast to coast, state to state, in urban and suburban neighborhoods,  You would never know it if you don't follow Ken's list of Pennsylvania Education Crisis Highlights or read a blog called The Notebook and perhaps this one. 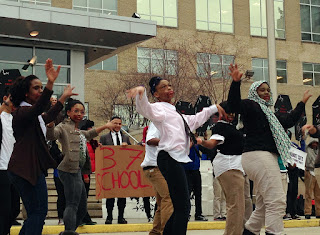 by thenotebook on Jan 16 2013 Posted in Latest news

From The Notebook by Charlotte Pope
Under a gloomy gray sky, members of Philadelphia Student Union (PSU), many dressed in torn clothing and with grimly painted faces, gathered Tuesday afternoon on the steps of the District building, 440 N. Broad St., to protest the proposed closure of 37 schools.
The PSU members staged a creative demonstration called “Student Apocalypse: A Brainless Future,” a performance that took the form of a dancing zombie flash mob.
The students held coffins and signs with phrases like “Fund our schools, fund our future,” and chanted “No education, no life” before breaking into the famed Michael Jackson dance routine from the video “Thriller.”
Chris Riley, a 12th grader at South Philadelphia High School said, “This event symbolizes what would happen if they go through with the school-closure plan.
“I want the District to look at us, take a step back, and think.”
Students said that the proposed school closures are not in their best interest, and if carried out they would create more brainless students being shuffled through a system that isn’t working with them or for them.
Superintendent William Hite has said that the recommended school closures would be a step toward creating a more competitive school system by creating District schools that offer more attractive options for prospective students. Hite said the plan would also save the District $28 million annually.
But critics contend that closures could lead to more charter growth and that any savings would be offset by millions of dollars needing to be spent on transition expenses and other factors. PSU is calling for a moratorium on school closings, and an evaluation of the impact. The School Reform Commission will vote on the recommendations in March. If approved, school closures will be effective June 30.
Hausin Talbot, a 10th grader at Benjamin Franklin High School, rubbed green paint off his face as he talked about his concerns.
“Schools serve as a safe haven for students and community members -- where will we go?” Talbot asked.
“I plan to be in my school for another two years without interruption, and learn as much as I can so I can go to college and become a doctor,” he said.
Raquanda Rivers, a 10th grader at the Promise Academy at West Philadelphia High School, said “I care about our education, and we are all here to show that if we don’t have an education, we don’t have a life.”
Rivers said she worries about growing class sizes, teacher terminations, and the danger presented to the communities by having additional empty buildings throughout the city.
Over the next month, Rivers said, she is looking to recruit other students to join PSU.
“Students should be given a voice and be able to speak their minds so Dr. Hite understands how we feel,” Rivers said.
“[The people in the District] are grown. They have their education. What about us? We would like our education too.”
Charlotte Pope is an intern at the Notebook.