Paige had a Deputy Secretary from Pennslyvania by the name of Eugene Hickok, who was put in charge of passing out $75,000,000 dollars in federal discretionary grants to Bush Administration cronies.  This is where Bill Bennett's K-12, Inc. was born and other education industry kingpens got their nest eggs laid, including Lisa Keegan and Andy Rotherham, both with the Education Leaders Council that produced nothing to show for the $16 million in federal tax dollars they received.  Since then, Rotherham has emerged as an education "thought leader" who spend s lot of time in Sun Valley skiing and leading thoughts, I suppose.

Below is a chart done by PFAW that shows where much of the federal money went that Hickok handed out (click chart to enlarge). 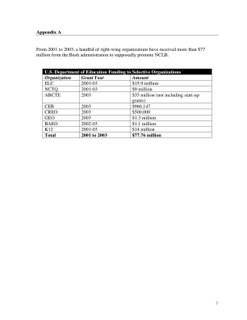 Eugene Hickok left ED when Paige departed, and soon thereafter he was forced to pay a $50,000 fine to avoid criminal charges for conflict of interest accusations.

Ron Tomalis was Hickok's assistant at ED, and when Hickok left for Dutko Worldwide to share his expertise with other bottom feeders, Tomalis went with him.

After PA elected to Republican, Tom Corbett, as Governor, Corbett chose Tomalis as the next best thing to Hickok for privatizing Pennsylvania's schools.  Below is a news story from last week that offers a clear picture of how these operate, which hinges on the kind of ham-handed crookedness that we have come to expect from the corporate reform schoolers.  The story from The Morning Call:
_________________________________
The number of charter schools hitting testing benchmarks plummeted after the federal government said the state Education Department graded them too leniently.

The new system, which Tomalis initiated without federal approval and at the behest of a charter school lobbying group, made it easier for charter schools to reach federal standards than traditional public schools. It classified charters, no matter their size, as school districts, which are measured on a broader scale than individual schools.

The U.S. Department of Education, however, shot down that change in November. It ordered Pennsylvania to recalculate the charters' AYP status on the school level and publicize the results by January. So under the federal order, charters must have the school-level and district-level grades.

Under Tomalis' system, 77 charter schools — or 49 percent — made AYP when they were measured as school districts. But when tabulated as individual schools, only 43 — or 28 percent — made AYP, according to a Morning Call analysis of state data.

Of the seven charter schools in Lehigh and Northampton counties, only the Lehigh Valley Academy Charter School was affected by the change. It made AYP as a district, but dropped to warning status as a school.

Roberto Clemente in Allentown and Seven Generations in Emmaus made AYP on both grading scales.
Lincoln Leadership in Allentown, and The Lehigh Valley Performing Arts High School, Vitalistic Therapeutic and Dual Language, all in Bethlehem, missed it on both levels. (Vitalistic will close Friday for financial reasons.)

That equates to about 29 percent AYP success rate on a school-level basis and a 43 percent success rate on the district level for Valley charters, The Morning Call's analysis shows.

Pennsylvania had long graded charter schools, which are funded with tax dollars, as individual schools. Under such a system, a school achieves AYP if a percentage of its students in each tested grade scores proficient or advanced through straight or curved scores. Student scores are further broken down by student demographics. If at least one demographic group in any grade level fails, the whole school fails.

A school district is measured on a broader scale that uses grade spans: 3-5 for elementary schools; 6-8 for middle schools and 9-12 for high schools (though only 11th-graders are tested). Only one of the three grade spans needs to hit the testing targets for a district to make AYP.

Tomalis did not announce he had switched over to a district-based system for charter schools when he released 2012 PSSA results in September. But he did blame the drop in statewide PSSA scores on tighter testing rules he instituted in response to what he said were episodes of cheating.

Tim Eller, Department of Education spokesman, declined to answer questions about the disparity The Morning Call's analysis showed between the two types of charter school results.. . .
at 8:21 AM