In Iraq mercenaries are called contractors, and they are paid huge sums beyond what GIs are paid to hunt down and kill people. In this country we have another kind of contractor in the ed biz, but this one is preying on the federal Title I dollars that were intended to help poor children in school. As part of the neo-con No Corporation Left Behind philosophy, NCLB is pumping almost $2.5 billion a year into the tutoring industry, with the majority of it going to a handful of corporations like Sylvan, Princeton Review, Kaplan, and Edison (Newton).

After the third year of failing to make NCLB test targets, the failing school must use up to 20% of its Title I money to pay for more cognitive-decapitating test prep, this time in the form of tutoring for which companies can charge the school up to $40 per hour for each student. Schools are forced, then, to cut other services, resources, and personnel that had previously been provided by Title I funds. This loss comes on top of money paid out in transportation costs for student transfers after Year 2 of failure to make test targets. In the meantime, companies like Educate, Inc. saw their 2004 profits soar by 402 percent.

None of these facts is reported by Spellings' go-to media guy, Ben Feller, in his cheery promo now circulating from AP as part of a week-long ED public relations blitz led by Feller. The intro and pic would lead you to believe that Bush had developed a new humanitarian economic plan to salvage the crumbling hopes of an endangered middle class. A new corporate welfare ed industry or a Mom and Pop operation?:

— Lew and Sharon Goldfarb went looking for a way to make some extra cash and help kids learn, too. They found both in President Bush's No Child Left Behind Act.

The suburban Columbus, Ohio couple bought a franchise with a Florida-based company, Club Z! In-Home Tutoring Services, that provides one-on-one academic help. The Goldfarbs now have 100 tutors working for them, and much of their business is due to the 2002 education law. 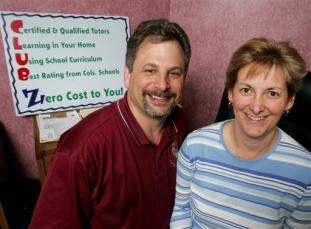