Inspired by a free-market fascism that aims to make government the weapon of unregulated capital, Spellings' Higher Education Commission tipped its hand Thursday--and in doing so might have begun the upset of its entire applecart.

Rumor has been widespread for months now that the Commission planned to recommend a high-stakes testing regime in American universities. Response by students, professors, and administrators in higher ed has indicated that such a policy, if implemented by these morons, would be dead on arrival.

It has become clear now with the "working documents" released Thursday that a more insidious form of nationalizing the American university system is in the works:

Now the Secretary of Education’s Commission on the Future of Higher Education has a new target: higher education’s longstanding, little understood, and much-maligned system of regional accreditation. And an “issue paper” Miller released Thursday leaves little room for misinterpretation about the perceived problems or the proposed solution: a “national accreditation foundation” that Congress would create to replace the current system.

These characters, showing more hubris than good sense, are floating the idea of a nationalized system of university accreditation. The response thus far has been about as supportive as the respone to the attempted takeover of Baltimore schools this week. From Inside Higher Ed:

Longtime observers of higher education who are familiar with but not part of the accreditation system had a range of reactions to the commission’s statement. Jack H. Schuster, a professor of education and public policy at Claremont Graduate University who is visiting this year at the University of Haifa, said he shared Eaton’s concern about the possible federalization, or at least nationalization, of quality control, which he called a “frightening prospect".

Schuster, who wrote in an e-mail messge that he has “spent a career criticizing aspects of American higher education (hoping thereby to suggest viable means for improvements),” said he nonetheless considers American higher education to be the world’s best, not “despite the absence of centrally imposed standards and ‘quality control’ ” but arguably, “because of the rough-and-tumble scramble among an amazing array of institutions: public and independent, religious and secular, complex and more focused, prosperous and vulnerable.”

He adeded: “The idea of creating an all-knowing policeman for the purpose of applying acceptable quality-control standards on this admittedly messy congregation is frightening — not because it would ill serve the interests of the institutions themselves, but precisely because such a centralized regulatory system would do a great disservice to the public interest.”

Robert H. Atwell, a former president of the American Council on Education who more than a decade ago led an effort to create national accreditation standards, said he largely sympathized with the views expressed in the commission’s paper, although he said he would lean more toward putting more power in the hands of an independent group (like Eaton’s CHEA) than in creating a quasi-governmental agency.

But he warned commission leaders that in challenging the regional accreditation system, they had potentially taken on a major battle.

“These regions are very powerful when they decide to go to war,” because “the institutions they accredit become their supporters,” Atwell said. If the commission pushes a fight, “there’s going to be blood all over the floor.”


All this federalizing by the, otherwise, vociferous protectors of states rights would be a hard sell for any Commission even if they had arguments based on good research. It will likely prove impossible for this half-baked Iraqi-esque scheme based on some manipulated numbers produced by a functioning subsidiary (American Institutes for Research) of the Bush Administration. Go to AIR's website for examples of fair and balanced '"faux" research. (A favorite of mine is the grossly biased junk science used to "prove" that the straight jacket method of direct instruction exceeds all others in effectiveness: Study Rates 22 Widely Used Comprehensive School Reform Models. 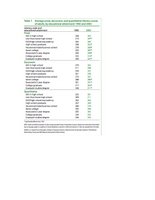 As an example of the kind of data that these Higher Ed Commissars use to make their case, consider their argument that "the National Assessment of Adult Literacy, released in December, shows that the average literacy of college educated Americans declined significantly from 1992 to 2003."

Sounds scary, yes? Have a look to your left at Table 7 (click it to enlarge) from that NAAL study, and you will see just one example of how the Commissars mislead with the numbers. Table 7 clearly shows that college students share something with the rest of the American population--they, too, showed a decline in literacy from 1992 to 2003. Does that mean that the Commissars want to form an national accreditation oversight board for what it means to be a proficient American? But let's not give these dopes any more bright ideas.

If these underemployed and ideologically-crazed functionaries were interested in a real problem, perhaps they would form a commission to study the reasons for an overall fall in literacy? Could it have anything to do with the fact that corporate TV has replaced books, or that the reading of nonsense words by 1st graders gets them the same score as reading Cat in the Hat? Or perhaps most Americans are just too damn tired to read when they get home from their second job?

Those are just a couple of possibilities--I'm sure you can think of others.