Ever since the 19th Century when the rote teaching of the Latin grammar school masters of New England was challenged by Horace Mann's call for teacher training programs and new methods of instruction, an unceasing dispute between traditionalists and progressives has been ongoing.

Only since the cons and the neo-cons arrived in Washington, however, have we seen a concerted campaign to crush the opposition, thus bringing an end to accredited teacher preparation programs and the professional organizations of teachers. The Walmarization of teaching is a high priority by the corporate welfare con artists of the ed industry who are crafting federal education decisions, and the collective bargaining of teachers threatens the future earnings of the for-profit charter schools poised and hoping to take over public schools as NCLB mandates kick in a couple of years down the road (if reauthorization goes forward next year).

In that regard, I have noted before the remarks by Bush's former reading czar, Reid Lyon, who said this in 2002: "You know, if there was any piece of legislation that I could pass, it would be to blow up colleges of education." And how can we forget that zany Secretary of Education, Rod Paige, who referred to the NEA in 2004 as a "terrorist organization."

What is the connection of these with-us-or-against-us incendiary remarks to the big NCLB lie of a highly-qualified teacher in every classroom? First, you must understand that the neo-con definition for "highly-qualified" is the opposite of what a we have long considered a highly qualified teacher to be--one with subject expertise and certification through an accredited college teacher preparation program.

Remember, ignorance is knowledge in the neo-con Orwellian house of mirrors, and "highly-qualified" has come to mean a subject matter degree and a desire to teach in the formulaic, "scientifically-based" ways that closely resemble the memorization and recitation of those same 19th Century Latin masters. The biggest difference between the preferred method then and now is that the hickory stick used to beat children into submission has been replaced by a # 2 pencil and a bubble sheet. The neo-cons, in fact, prefer no no teacher preparation beyond a subject matter degree if is likely to threaten the scientized dogma derived from the Code People.

The other big difference between then and now is, of course, the profit motive. That helps to explain why ABCTE, the fraudulent creation of the ethically-challenged Education Leaders Council (ELC), remains the preferred path, or "passport," to teaching by career changers who are moving into this foreign territory that they know nothing about. Promoted by the former Secretary of Ed. before his cronies could even develop their miracle test to offer candidates at $500 a pop, ABCTE will be making a public splash on May 11 at the National Press Club as a way to fill the gaps for states who have not met the "highly qualified" deadline.

ABCTE offers a chance to become a fully-certified teacher in Florida and Idaho (Pennsylvania and New Hampshire are hedging), with no requirements for student teaching, no methods courses, no child development courses, no ed psych, no historical or philosophical foundations (god knows, no Dewey!), no special ed, and no diversity preparation.

Spellings, who has been waiting for the "highly-qualified" deadline of May 15 in order to appear magnanimous by extending the deadline, will likely recommend ABCTE as an "helpful" alternative to professional teacher preparation. She tipped her hand, in fact, the other day in Philadelphia:


I want this event to kick off some serious debates about how to solve the issues we're facing.

For example, how can we reform our personnel system to make sure our most challenging schools are served by our most effective teachers? Shouldn't we track the results they're getting with students and learn from that data? Since we know that teachers with strong content knowledge get better results, shouldn't we reach out to professionals from other fields to bring them into our classrooms, especially when our shortages in these critical areas are so great? 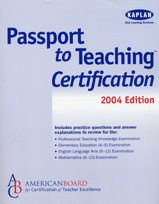 Could it be that many our most effective teachers, whether inner city or outer suburb, have left teaching because NCLB fallout has made teaching a nightmare? Could it be the 50% turnover in new hires that we see every five years could have been exacerbated by the NCLB-inspired pressure cooker environment of today's public schools? Could the shortage have anything to do with the fact that competent teachers who are at the top of their game are simply unwilling to go along with the insanity?

Whatever the reason, we need some people seeking teaching passports, yes? Buy your Kaplan study guide for 4o bucks, and take a test for $500 online (courtesy of Pearson, Inc.), and, voila you are a teacher. Could anything be more highly qualified than that?

And by the way, Pearson could be a very good stock tip. They just bought National Evaluation Systems, the company that has some of the largest state teacher certification testing accounts. As reported by the Guardian, Pearson is bullish on increasing market share:

NES has contracts with 15 states and Pearson hopes that some non-testing states will begin assessing teachers soon. There are 3 million public school teachers in the US and it is a profession with a high turnover that sees half of newly qualified teachers quitting the profession within five years.

"You are getting a consistent coming and going of teachers and that presents opportunities for testing," said Mr Dowling.

Analysts at ABN Amro described the deal as a "sensible bolt-on", while UBS said it "helps Pearson access a bigger share of the No Child Left Behind federal funding and expand its market opportunity."