"History May Not Cut It" 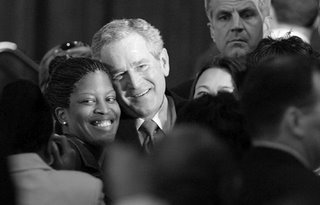 Yale history major, George Bush, was sent down to Tuskegee on Wednesday to make the formal annoucement of the American Competitiveness Initiative (ACI). For those who have watched over the years as Spellings and Bush have plied their cynical lies regarding an egalitarian rationale for NCLB, it is not surprising to see them take the stage at Tuskegee to suggest that the ACI is aimed to help the brown and the poor to find a way out of the second-class status that Bush's and Spellings' conservative cronyism and social-engineering-through-testing-policies have both exacerbated.

Although Bush would wait until his California trip on Friday to actually make it explicit that the different "skills sets" that students will need in the brave new future do not include history, and that 'history may not cut it," he did take the opportunity at Tuskegee to downplay history's importance by pointing out, in good ole' boy self-deprecating fashion, that his own undergraduate degree in history had left him unprepared to understand what he was seeing in the labs at Tuskegee, while expressing amazement that Tuskegee could actually have real scientific labs:

And here are some things we need to do to make sure we shape the future. First is to make sure we're always on the leading edge of research and technology. I saw some amazing things happening today. I was a history major so maybe they were really amazing because I didn't know what I was looking at. (Laughter.) Seemed amazing. (Laughter.) I was at the Center for Biomedical Research -- I was really at the Center for Advanced Materials called T-CAM, a sister organization to the Center for Biomedical Research and for the Center for Aerospace Science Engineering. Isn't that interesting, those three centers exist right here in Tuskegee.

What is ironic in Bush's pro-technology and anti-history campaign that was launched at Tuskegee this week (and is sure to picked as part of the Spellings Commission plans for state universities) is that Bush probably has no historical knowledge that his kind of philanthropy resembles the policies of McKinley and Taft, who came to Tuskegee after its founding in 1881 to hail its industrial education model as the solution to the "Negro problem." Rather than support the liberal arts curriculums of higher ed institutions such as Harvard of Yale or Vanderbilt, the solution then was to inculcate the value of labor, any labor, for African-Americans, rather than the value of a well-rounded education that included the classics, the arts, and yes, history.

Booker T. Washington, Tuskegee's first principal and implementer of the racist social policies he had learned at Hampton Institute under the tutelage of Samuel Chapman Armstrong, became the sweetheart of white Protestant elites because of his brainwashed complicity in the acceptance of segregation and second-class citizenship as the price to be paid for a chance to work. (See James Anderson for more on the industrial education model).

But an anti-history history major would never know these facts, much less understand them. I am wondering, then, if Bush, who has a such a low regard for historians, realizes what low regard that historians have for him. Even before Katrina, domestic spying, or lies about war intelligence, historians, both conservative and liberal, gave Bush a 19% favorable, 81% unfavorable rating. The ratings today must be in the minus territory, much like I imagine the ratings are among the African-Americans who dutifully listened to his subterfuge this past Wednesday at Tuskegee, a great university today despite the oppression of the white philanthropy that would have kept it a training center for labor.
at 1:12 PM