A New STEM From the Same Old Bush

Since February, Spellings and a group of Bush cronies, including top Texas Instruments folks (as our Leaker-in-Chief would say), have been finalizing the STEM (Science, Technology, Engineering, and Mathematics) Education. It is part of the ACI (American Competitiveness Initiative), which is the federal response to the disguised corporate request for the following:

1) a smokescreen, a rationale, and a diversion for the continued outsourcing of high tech jobs, and
2) a permanent continuation and expansion of corporate tax credits for R & D ($86 billion over 10 years).

Recall the CEO-studded Augustine Panel Report, Rising Above the Gathering Storm, which was created to function today as the Reagan-era scare document, A Nation at Risk, served the previous generation to hide corporate failure to meet the economic challenge of the day, while kicking off the first wave of ed testing regimes that have left the nation’s schools demoralized, dazed, and confused. The essential difference between the then and the now scare documents is that the source of fear has shifted westward slightly from Japan then to China and India now, and the educational prescription being devised now to shroud the outsourcing and the corporate begging for more welfare payments is focused on improving math and science with more testing, rather than improving everything with more testing. The goal of crushing public education has remained the same since Reagan, even though the intensity of the attack has grown tenfold since. What Reagan didn't recognize is that he could have used the Dept. of Ed that he wanted to eliminate to, instead, set a time bomb, as Bush has done, to eliminate the public schools by 2014.

Thus, we have now have STEM, with a bold red capital M for Math. STEM will be grounded, in fact, by a new scientifically-based math teaching, and we can be certain that the new National Math Panel is intended to serve the same purposes as the National Reading Panel Report. We can, therefore, conclude that National Math Panel will find that learning math (scientifically) will require the same pedagogical catechism that allows for no deviation and a minimum of thinking, thus assuring consistency with the approved approach to teaching reading.

$10 million has been set aside to make this Panel happen just as soon as Spellings and Texas Instruments can find enough academic mercenaries who will sell their souls to sign on to the preconceived conclusions that will allow reading and math to appear as a boxed set of scripted direct instruction sold to be sold by McGraw-Hill, Harcourt, and, yes, we can count on a new magic teaching toy by Texas Instruments to go in the math box. That’s just a guess, of course.

I surmise that this is new "empirically-based" math, like the "empirically-based" reading, will find its evidence in test scores, and that more scripted teaching is what is in store for the poor, who will remain in need of this kind of remediation for as long as tests can be devised to guarantee it. There will be other goodies, of course, for the students with the larger houses and the smaller classes, the AP and IB students who will have a much different education than the straight-jacketed ones offered to the children of the poor. There is $122 million set aside in 2007 budget for more of these AP and IB children, so that we can begin, in earnest, to create a vast oversupply of our own homegrown engineers who may be willing to work for Chinese wages.

I know that the pointing out of these different treatments for different income groups will seem divisive to those in the higher income groups. These are the folks who still tell the poor children in poor schools that if they try hard enough they can get those science and engineering degrees, too. Isn’t the real problem the shiftless and resistant personalities that are rewarded by shiftless and resistant teachers?

Here are two slides from my research that show how this cherished myth of blaming the victim needs to be discarded with some of the other 1950s liberalism that we hear from the sorority sisters at Ed Trust, whose vacuous optimism only serves to shame the poor into accepting the failure that we devise for them and to assuage the guilt of those who still have some. 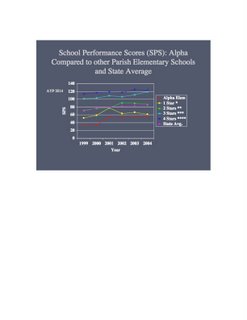 This slide (click it to enlarge) is based on research I did in a Louisiana public urban elementary school, a school I call Alpha Elementary (represented by the red line at the bottom). The other schools, from one-star to four-star schools, receive those designations based on school performance, a combination of state test scores (LEAP), the Iowa Test of Basic Skills), and attendance. On the left, note that Adequate Yearly Progress has been set at 120 SPS for the magic date of 2014, when all schools must reach that level.

Now you tell me, or better yet tell the parents of these children, whether or not these poor kids in these poor schools have a chance in hell of making the 2014 goal. At the same time, tell them which schools have improved the most since 1999. I know what these kids and these teachers and this community of Alpha Elementary have done since 1999, and they have tried it all, and they have worked their guts out.

Then tell the kids at Alpha that if they just work hard enough, they will one day be successful engineers like the kids in the 4-Star school. Tell that to the 40% of 4th graders at Alpha who are held back every year because they did not pass the LEAP. To summarize Myles Horton, any child who at Alpha who would believe that lie is too stupid to be an engineer, anyway.

And finally, here is a second slide (click to enlarge) that shows the correlations between economic status and school performance. I don't think this picture needs much comment. Just look at it for awhile. Read it and weep. 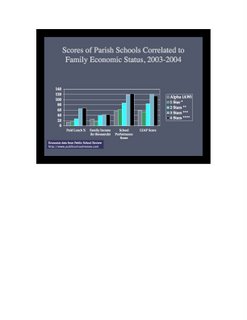