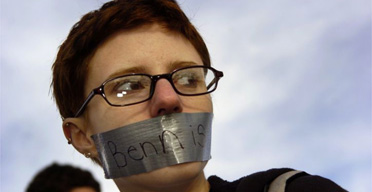 Where does one look in the major American print media for coverage on the insidious new form of McCarthyism that is having a chilling effect on free speech in American classrooms, both high school and college? Answer: Nowhere.

You have to go outside the country to find a substantive piece like this one in the Guardian by Gary Younge:

Few would argue there are direct parallels between the current assaults on liberals in academe and McCarthyism. Unlike the McCarthy era, most threats to academic freedom - real or perceived - do not, yet, involve the state. Nor are they buttressed by widespread popular support, as anticommunism was during the 50s. But in other ways, argues Ellen Schrecker, author of Many Are the Crimes - McCarthyism in America, comparisons are apt.

"In some respects it's more dangerous," she says. "McCarthyism dealt mainly with off-campus political activities. Now they focus on what is going on in the classroom. It's very dangerous because it's reaching into the core academic functions of the university, particularly in Middle-Eastern studies."

. . . . These issues are not confined to university campuses: it is also happening in schools. Since February, the normally sleepy, wealthy district of Upper St Clair in Pennsylvania has been riven with arguments over its curriculum after the local school board banned the International Baccalaureate (IB), the global educational programme, for being an "un-American" marxist and anti-Christian. During their election campaign, the Republicans of Upper St Clair referred to the IB, which is offered in 122 countries and whose student intake has risen by 73% worldwide in the past five years, as though it was part of an international communist conspiracy, suspicious of a curriculum that had been "developed in a foreign country" (Switzerland). "Our country was founded on Judeo-Christian values and we have to be careful about what values our children are taught," said one Republican board member. Similar campaigns have also sprung up recently at school boards in Minnesota and Virginia. . . .
But however many people are involved, the attacks do make a difference, claims Gilroy. "Of course it has an effect," he says. "There's a pre-written script you have to follow and if you chose not to follow it, then there are consequences, so you become very self-conscious about what you say. To call it self-censorship is much too crude. But everybody is looking over their shoulder".