Speller and Fellings and Feints

Spellings and media lap dogs, Ben Feller and Co., have put a wrap on their week-long public relations campaign against state departments of education, schools, and teachers--with the final piece appearing yesterday. Let’s see what Maggie has accomplished along the way: 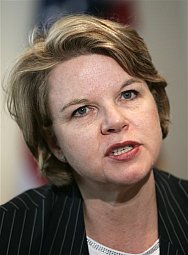 All in all, it’s a pretty good week of work for Spellings, a dedicated public servant ever intent upon using a willing media to rescue the public from the policies her own department is perpetrating. Now that's what I call PR.

Look for NAEP (Not Any Escape Portals) and Growth Models (making poverty invisible) to be next on the road to rescue.
at 2:08 PM