Admission of Stupidity as the Moral Preference to Cowardice 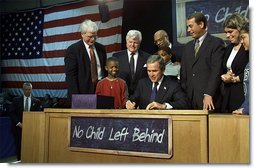 The conservatives of the Reagan era had erred in thinking that histrionics, alone, (A Nation at Risk) would be enough to convince parents of the total failure of their public schools. By the time Bush came along, conservatives had devised a plan to create evidence that the public schools had failed. That plan, No Child Left Behind, would put in place impossible performance goals for schools (100% of students at grade level by 2014), and then hand out a graduated and increasing-harsh set of sanctions that would lead to the privatization of American public education.

Yes, that is Ted Kennedy in the center there, smiling down on the President signing his favorite piece of legislation. I wonder how long it took Kennedy to figure out that he had been had. Or was he had?

Apparently, the seat of chief liberal bloviator does not require any political acuity at all. Latest example: today in WaPo Kennedy pines about how he has just discovered that the Roberts and Alito appointments were intended to set back the social agenda in America by a hundred years. Damn, if he had only known! If I were that stupid, I would not be advertising it in the Washington Post:

The administration's tactics succeeded in turning the confirmation hearings for Roberts and Alito into a sham. Many Republican senators used their time to praise, rather than probe, the nominees. Coached by the administration, the nominees declined to answer critical questions. When pressed on issues such as civil rights and executive power, Roberts and Alito responded with earnest assurances that they would not bring an ideological agenda to the bench.

After confirmation, we saw an entirely different Roberts and Alito -- both partisans ready and willing to tilt the court away from the mainstream. They voted together in 91 percent of all cases and 88 percent of non-unanimous cases -- more than any other two justices.

What we know, of course, is that Kennedy is not stupid at all. But, rather, this is another classic Democratic example of a pretended stupidity being deliberately chosen as the moral preference over an admission to true cowardice.

Will the Democrats stand up for public schools in the coming NCLB reauthorization debate? Or will their cowardice make them all totally stupid again?
at 7:26 AM