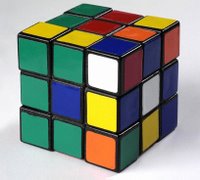 This past week, NCLB -- a baroque and inordinately complex law -- has transformed into something more closely akin to Rubik's Cube. After this week's dust-up, I challenge anyone to put all the colors together again, i.e., make sense of this law. Feel up to the challenge? OK, without Googling, answer this question: what's the difference between states that were granted "Approval Pending, No Withholding, Level 2," "Approval Pending, No Withholding, Level 1," "Approval Pending, Withholding Funds," and "Approval Expected"? If you were able to answer this, then please also tell me who's on first, where Jimmy Hoffa is buried, and the difference between mud.

After the shell-game shuffle, here's what The NCLB Cube looks like now:

- Throughout Spellings' tenure as ED Secretary, she -- unlike her predecessor -- has been working to create the sense that she is willing to be flexible and work with the states in meeting the law's requirements.

- Yet one year prior to re-authorization, the feds suddenly (Doug Christiansen, Nebraska's Commissioner of Education, said he was "blindsided" by the news) pull the rug out from under state accountability systems, granting full approval to only 4 states: Maryland, Oklahoma, Tennessee, West Virginia.

- Despite its lawsuit against the feds, Connecticut expects to have its system approved.

- Despite its lawsuit against the feds, Arizona expects to have its system approved with some recommendations.

- Despite telling the feds and NCLB to take a hike, Utah expects to have its system approved with some recommendations.

What the hell is going on? What's the play here from Spellings, et al? It appears to be Ye Olde Sucker Punche: Spellings assumes the role of Monty Hall and say to the states, "Let's make a deal!" But as the deal-making dies down and as the initial hue and cry starts to fade, she throws a round-house right out of nowhere. Strategy: completely confuse everyone. Create 50+ versions of the law. Dangle the "growth model" carrot, but only grant it to two states. Appear flexible, yet approve only four states' plans.

Intended result: have everyone cry "uncle" so that the reauthorization debate will be an exercise in futility as lawmakers, already completely unconcerned with education as a national priority, are forced to wade through this complex behemoth. If lawmakers didn't read the original legislation in 2001, what makes anyone think they will even attempt to read not only the revisions to the existing law but the 10 million proposed changes from every think tank and policy shop on the planet?

End result: NCLB goes through cosmetic changes and is reauthorized pretty much as is.

The only way to change this likely outcome is to make education a national priority. To do this, the folks in Washington will have to see with their own eyes that parents, teachers, students, and citizens want something else. We can't rely on kangaroo court commissions like the Commission on No Child Left Behind, chaired by Tommy Thompson and Roy Barnes, with their fait accompli agendas. Nor can we rely on the NEA or the AFT to lead this charge. It must be grassroots. It must be organized nationally but acted upon locally. And it must be led by parents.

I genuinely believe that we can create mass interest in substantive educational reform if we tap into parents' self-interest first, i.e., "Your son's school, the one you like so much, is under attack and you need to do something about it before it's too late." We can then tie in the ethical message that goes beyond their immediate self-interest, i.e., "Your son's school is not the only one being assaulted. The attack on public schools is part of the Bush agenda behind NCLB," etc.

As the test scores start to come out in the next couple of months, I expect the drum beats to start getting very loud. If they don't, then we need to make sure we find some drum beaters out there to make some noise.
at 10:45 AM

Email ThisBlogThis!Share to TwitterShare to FacebookShare to Pinterest
Peter Campbell
Peter Campbell is an educator, academic technologist, and parent. He holds a BA from Princeton University and an MA from New York University. He has been involved directly or indirectly in education for more than 25 years. He currently works for Blackboard, Inc. as a Regional Sales Manager in the Collaborate division. Before joining Blackboard, Peter served as the Lead Instructional Designer and the Director of Academic Technology at Montclair State University in New Jersey. Immediately prior to his job at Montclair, Peter served as the Product Manager for an educational start-up (Learn Technologies Interactive). In this role, he oversaw the design and development of a K-12 learning management system, e-learn.com. His passion for education was forged back in 1987. He began teaching for The Princeton Review, then moved to Tokyo and taught English at a Japanese high school for two years. He later moved to New York City, where he worked as an adjunct in the speech department at Manhattan Community College. He went on to teach writing at the U of Missouri in 1995, and it was there that his interest in educational technology was born. Views expressed here are solely those of Peter.