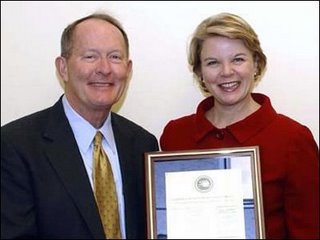 Now we know what Spellings was doing this past weekend as the new research study emerged from the bowels of ED showing that, when poverty is taken into account, public school students do as well on tests as private school students. She was, in fact, planning a big event to announce the introduction of a piece of ED-crafted legislation that will introduced by Senate lapdogs, Alexander and Ensign, to initiate a nationwide voucher program. One can only be stunned by the audacity of these crusading privatizers, now no longer hiding behind the guise of seeking to improve public schools. Well, not quite guise-less. You see, the $100,000,000 offered by ED in 2007 is intended to offer vouchers only until the blacklisted public schools can be improved. Right. Of course, as NCLB guarantees a ever-increasing supply each year of more failing schools, we can assume this restructuring is going to take a long, long time.

By the way, who do you think is lying here about the invisible study from this past weekend, Spellings or Grover?"

She [Spellings] said she had learned of the study — put out by a branch of the Education Department — only through the newspapers on Saturday and had not read it. She said that the Education Department had not tried to bury the report, as a teachers union leader had charged, by releasing it on a summer Friday. “My philosophy on reports out of the Department of Education is that we shouldn’t do it on a Friday,” she said.

Grover J. Whitehurst, director of the Institute of Education Sciences at the Education Department, said that the secretary’s office had received the report for review two weeks before its release.