Child Labor, Child Abuse, and the New Schooling for the Poor 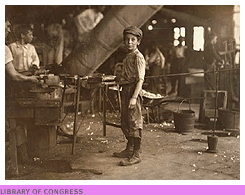 During the 1930s, child labor laws were finally taken seriously only after the jobs that children were doing in factories became essential to keep adult men from starving during the Depression. Mandatory school attendance laws were beefed up, and liberals could pat themselves on the backs that they had ended an era of child exploitation.

Well, there is a new war on childhood to combat for any remaining liberals who care to notice, and this one begins in poor neighborhood kindergartens (see Times story) that were intended, ironically, to remove children from the onerous world of adult work. Yes, test preparation has bled through to the children’s garden like an unstoppable dark stain that threatens to blot out our understanding of the healthy development of human children. Those deluded “educators” who still believe that the current era of education reform-by-testing is intended to close the achievement gap, are finding that they must begin earlier and earlier to impose a rigid instructional orthodoxy in hopes of displacing the implacable effects of poverty, the chief reason there is an achievement gap to begin with.

So work begins for poor children at an earlier age, replacing the essential play required for healthy psychological and social development, which is now reserved for zip codes where economic privilege allows for very different kindergarten curriculums. In the meantime, Poverty, the unseen elephant, continues to trumpet and the tear around the classroom where preoccupied teachers work to keep up the schedule of phonics drills, arithmetic drills, and bubble coloring that they are required to choke down their children with ever-increasing difficulty.

All work and no play makes Jack a dull boy—fit for the dull job that is planned for him in a dull world he will never be asked or enabled to understand.

Would you allow this for your child in her kindergarten? Or would you call it child abuse?
at 8:12 AM