Holes in the Tent at Sister Spellings' Voucher Revival 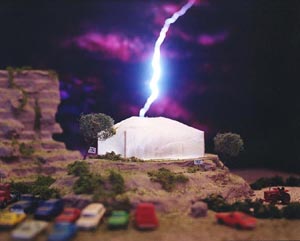 As we get a few days distant from Spellings' announced voucher revival plan, it is even more amazing that voucher neutralizing report, Comparing Private Schools and Public Schools . . ., ever got out the door at ED, even if it did slip out on a Friday afternoon. Could it be that there are some at ED, who, by slipping the report past the attention of Her Clueless, Spellings, did actually demonstrate that some in the Department believe the public schools should be preserved and strengthened, rather than being crushed?


After all, it's worth remembering that there were many inside the CIA screaming about the fraudulent Niger uranium story, even though the lie did get shoved into the State of the Union by Cheney's thugs. Could the voucher annoucement be just another case of the truth be damned, full ideological steam ahead?

Yesterday's Roanoke Times had this story, "School Voucher Fans Forgot Their Homework," which includes an apt reminder of the Katrina-esque type of "rescue" that Mom Spellings has in mind for the poor school children:

Not that $4,000 would go very far anyway. Private school tuition has skyrocketed in recent years. North Cross School in Roanoke, for example, charges $8,450 to $10,625 per academic year depending on grade. Scholarships are available from the school, but many moderate- to- low income families would remain hard pressed to afford it even with a scholarship and a voucher.

If Washington has $100 million to boost education, there are better uses than directing it toward private schools with minimal accountability and no discernible advantage over public ones. Improve the socio-economic conditions that are the real contributors to academic success or put it into the public schools that serve all students.

Such occasional honest newspaper pieces cannot compare, however, to the conservative sludge tanks, who are geared up to pump tons of smelly propaganda proclaiming "opportunity scholarships" for the poor, the poor who are only seen by the writers of this propagauda either leaf-blowing their lawns or being loaded into police vans on the local news. By the way, these faux news stories never mention a Comparing Private Schools and Public Schools . . . , the inconvenient scientifically-based research that seriously undermines their attacks on public schools.

Today's entries in the propaganda war come from Focus on the Family and The Heritage Foundation, respectively: Congress Considers National School-Choice Program and At-Risk Students Now Have a Lifeline.

Call your Congressman's office today to remind her that you believe in stronger public schools for all children, rather than substandard private ones for the poor at public expense.

Or counter the propaganda directly--write a letter to your local newspaper in support of stronger public schools and stronger communities with less poverty.