The Consumption of Citizens and the Clearance Sale of Democracy

Last week California reported that for the first time ever, over half of the children in the State's public schools qualify for federally subsidized school meals. Over half.
Since 2000, the number of Americans living in poverty (below $20k for a family of 4) has increased from 31.6 million to 37 million.

Numbers from the National Center for Children in Poverty for 2004 show 18% of America's children living in poverty and 40% living in low-income families (below 40K for a family of 4). 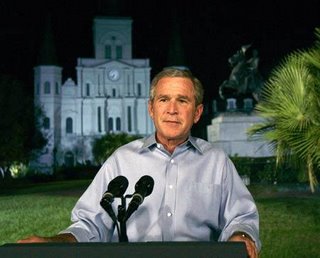 Since being trotted out last September under the Musco Lights in an otherwise darkened New Orleans, the subject of poverty has once again been erased from the White House script, replaced by fear, anger, war, self-righteousness, and the smugness for boosting an ownership society that fewer and fewer can any longer afford.

Instead of helping the poor, this Norquist-inspired White House has carried out a concerted campaign to loot the Federal treasury by dumping it into the laps of corporate campaign givers and insider cronies, while squeezing off the tap to programs to help the poor survive the economic boom that they might read about.

All of this is happening in the presence of an incontrovertible educational reality: as goes gaps in family incomes, so goes the achievement gap. As the economic gaps grow wider, so, too, do the academic achievement divides. So with AYP guaranteed to go down as poverty increases, the demand for increased AYP goes up as we all march heedlessly toward the 2014 educational gas chamber. And yet any day of the week, you can read this kind of lead to a "shocking news" story like this one that appeared today in the Ironwood Daily Globe:

John Lupino pointed out a startling piece of information to the Hurley School Board Monday evening.

The school district's guidance counselor noted by the 2013-14 school year, the federal No Child Left Behind Act will require the school district to be 100 percent proficient or advanced in all testing categories.

It took the guidance counselor to point this out to the Board? Helloooooo.

When the conservative agenda has reached its zenith, citizenship will have been reduced or elevated to purchasing power, and those without the resources to buy will no longer be represented, just as those with the resources will find nothing to block their purchase to power. This is the great shame that even conservatives secretly acknowledge and publicly deny, and it is the sad reason that the President does not talk about poverty any more than he talks about the fates of Ken Lay or Jack Abramoff. In the meantime, the great clearance sale of democratic institutions enters a new fiscal year.

Wonder what he will talk about today when he appears for the first time at the NAACP Convention? More on the ownership society, or his plan to put black children into inferior chain gang church schools at public expense?

Update: 2:05 PM:
From Think Progress on Bush's speech to the NAACP:

President Bush addressed the NAACP today for the first time in his presidency. Speaking on behalf of his friend, multi-millionaire conservative BET founder Bob Johnson, Bush used the opportunity to promote the repeal of the estate tax on the ultra-rich:

One of my friends is Bob Johnson, founder of BET. He’s an interesting man. He believes strongly in ownership. He has been a successful owner. He believes strongly, for example, that the death tax will prevent future African-American entrepreneurs from being able to pass their assets from one generation to the next. He and I also understand that the investor class shouldn’t be just confined to the old definition of the investor class.

President Bush’s “death tax” pitch demonstrates his stunning disconnect from the African-American community. According to an American Progress analysis, just 59 African-Americans will pay the estate tax this year, and that number will drop to 33 in 2009.