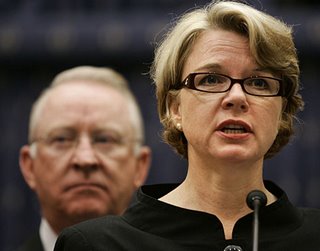 All that was missing yesterday from Spellings' executioner's regalia was the black hood (photo from USA Today). Although some see this national voucher move as a sop to the 3 Rs who make up Bush's core constituency (the Rich, the Redneck and the Far Right), this plan is a logical conclusion to where NCLB began, as an effort to use public money to fund private and religious K-12 education.
A little history is in order. Patience, please. In April of 2001, Congressional negotiations on the education omnibus bill that would become NCLB were ongoing. Testing requirements for grades 3-8 had been written into the bill, as had an unspecific promise of sanctions if schools did not achieve "adequate yearly progress." Senate staffer, Mark Powden, however, was troubled:

Powden, an 18-year Hill veteran, doubted the plan's ability to gauge schools' performance correctly--the linchpin of the Bush plan. So, as an experiment, he applied the Bush model retroactively to test scores in Connecticut, North Carolina, and Texas, three states that had improved their scores significantly in recent years. He discovered that the vast majority of the states' schools--schools with established track records in raising student achievement--would be labeled failures under the Bush system. When Powden presented his findings to White House officials and his fellow Senate staffers at a late-night meeting at the Dirksen Senate Office Building "there was stunned silence," recalls a participant. Powden, they realized, had just turned the cornerstone of their school reform package into dust.

White House education advisor Sandy Kress, the testing plan's author, scrambled to draft a new plan that the Senate passed in June. But independent testing experts who had read the plan's fine print pointed out that the new plan was no less flawed than the original. Kress himself would later call the new plan "Rube Goldbergesque." (Toch)

During or shortly after the "stunned silence" episode, the White House decided to drop their insistence on a voucher program for NCLB. By May the voucher requirement had been eliminated, Kennedy and Miller were celebrating, and the conservatives in Congress were apoplectic. What Powden had inadvertently done with his examination of the Bush Model was provide a way to more effectively demonstrate the need for universal vouchers through the authorized and guaranteed failure of the public schools. Bush could paint himself as the great compromiser, and ignorant Democrats could be herded into what would amount to a Congressional gas chamber that would seal the fate of public school supporters. Here is an account from the May 28, 2001 National Review:

The White House has made clear that the compromise bill is now the president's plan, so the bipartisan House bill and Kennedy's companion proposal in the Senate represent what the final legislation will include. Sandy Kress has been closely monitoring the reform compromises, and predicts, "We're going to get a bill which is very, very close to what the president wants."What the administration really wanted was bipartisanship, at whatever cost; as a frustrated Bob Schaffer explains, "The Republicans want a political win, and the Democrats want a policy win." And polls tell the GOP that its new bipartisan reform vehicle is a political winner: Three polls in April found Republicans outperforming Democrats on the education issue.

Kentucky senator Mitch McConnell predicts that the majority of Republicans will ultimately support whatever bill the president endorses because Bush "has taken us [from] a 20-point deficit on education . . . to a point in which we lead on education."

But one conservative strategist wonders why the White House is so eager for bipartisanship, when it now appears that Democrats are in need of remedial help with the public on the education issue.

"If the Democrats had a big advantage on defense issues, the last thing they would do is reach out for a compromise with Republicans," the strategist explains. (O'Beirne, 2001)

What Finn and Rove and Bennett and Kress knew, of course, is that they were in the boat, strapped in, and holding the rig, just waiting for the dumb Democrats to run with the bait, the hook, and the sinker they had just swallowed. Looking back at Paige's words as he pleaded with conservatives on the day before the May vote to strip vouchers from NCLB, we should have all known:

The day before the vote, Education Secretary Rod Paige urged conservative Republicans not to bottle up the bill in a dispute over vouchers.Paige said Bush and the administration are "clearly, unequivocally, forcefully for private school choice" but added that Democratic opposition was too strong for the GOP to prevail.Some House Republicans were furious over the White House's retreat ("Congress Votes to Reject," 2001, p. 15) .