I have never understood why parents, who can afford to have their children take college survey courses in history and literature and science and math, would opt to have their children chocked with facts in high school AP courses as an alternative. It seems like such a loss. Obviously, many of the best public school systems are beginning to do more than wonder about such practices:

This town’s public high school, well known for turning out some of the nation’s finest college prospects, is contemplating a step that would seem to betray its competitive reputation: eliminating Advanced Placement courses. 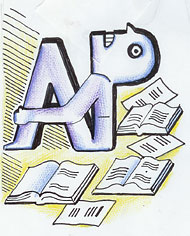 Scarsdale High School is a place where 70 percent of the 1,500 students take an A.P. course, and many take five and six to impress college admissions officers with their willingness to challenge themselves. But like a few private schools, Scarsdale is concluding that the A.P. pile-on is helping turn the teenage years into a rat race where learning becomes a calculated means to an end rather than a chance for in-depth investigation, imagination, even some fun to go along with all that amassing of knowledge.

“People nationwide are recognizing what an inhuman obstacle course college admission is, and a big element of that is A.P.,” said Bruce Hammond, director of college counseling at Sandia Preparatory School in Albuquerque, which dropped A.P. courses a few years ago.

Across the country, students in, say, A.P. American history who might better understand the Depression by taking time to read “Grapes of Wrath” are instead huffing and puffing through chronological parades of facts and documents.

Mastering that material will give them a better chance to score the all-important 5 on the College Board’s A.P. tests, which would help land them in an elite college and perhaps relieve them of some survey courses. But in that frantic atmosphere, little learning takes place for the zest of it, critics of the A.P. program say.

“The test unfortunately drives what you teach and how you teach,” said Kelley Hamm, Scarsdale’s assistant principal. . .

The rest from the New York Times here.