It is only fitting that the Armstrong Williams payola case find its way back to the front pages on the same weekend that ED starts payola-ing its bonuses for teachers who have been able to "produce" higher test scores--and just before the elections. The whole illegal operation involving Uncle Armstrong has come to a final fizzle, with Williams being required to pay back $34 thousand of the $240,000 that ED paid him for favorable NCLB propaganda in black neighborhoods, where children are receiving their ongoing daily procedures of cognitive decapitations.

Apparently the illegality of ED's actions in promoting "covert propaganda" will be swept aside. In comparison to the other unprosecuted crimes of this Administration, from Iraq to Guantanamo to New Orleans and every American telephone in between, this crime seems like boyish pranks. 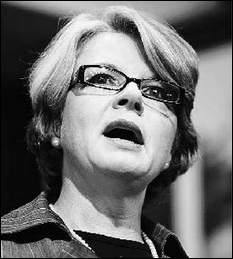 Here is part of the story on the teacher bonuses for test scores from a Ben Feller who seems suddenly to have figured out that Maggie won't be there to protect him much longer:

WASHINGTON -- In the closing weeks of the fall campaign, the Bush administration is handing out money for teachers who raise student test scores, the first federal effort to reward classroom performance with bonuses.

Sixteen grants totaling $42 million will go to schools in many states. The government has announced the first grants -- $5.5 million for Ohio -- where Education Secretary Margaret Spellings was to make the presentation today. Schools in Cleveland, Cincinnati, Columbus and Toledo will share the money.

The department will release the remaining grants right before the Nov. 7 elections in which the Republican Party is eager for good news.

Sen. Mike DeWine, R-Ohio, is trailing his Democratic rival. Also, Democrats have led for weeks in two House seats Republicans have held for a long time, and party officials talk of winning two or three more seats. Such gains could help the Democrats take over the House.