Eliminating Rights and Options on the Road to School Choice 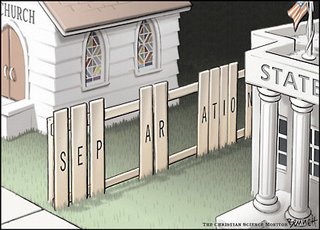 When you hear privatizers talk about school choice, you can be sure that they have in mind the elimination of the most viable option, public schools. By offering church schools and chain gang charters as "choices" for desperate parents who want something other than their under-resourced and under-staffed public school in their rotting neighborhood, the privatizing politicians play to their theocratic and corporatistic power base.

But what about the choices and rights of students and teachers that become constrained or eliminated by a lack of public protections under the law. The New York Times has this story today on the discriminatory practices that become protected by a church-state separation clause that is never mentioned when federal money is being dumped to the faith-based, but comes front and center when church-state separation can be used to protect the Church and its institutions from legal and ethical responsibilities to employees, acolytes, or students:

J. Jeffrey Heck, a lawyer in Mansfield, Ohio, usually sits on management’s side of the table. “The only employee cases I take are those that poke my buttons,” he said. “And this one really did.”

His client was a middle-aged novice training to become a nun in a Roman Catholic religious order in Toledo. She said she had been dismissed by the order after she became seriously ill — including a diagnosis of breast cancer.

In her complaint, the novice, Mary Rosati, said she had visited her doctor with her immediate supervisor and the mother superior. After the doctor explained her treatment options for breast cancer, the complaint continued, the mother superior announced: “We will have to let her go. I don’t think we can take care of her.”

Some months later Ms. Rosati was told that the mother superior and the order’s governing council had decided to dismiss her after concluding that “she was not called to our way of life,” according to the complaint. Along with her occupation and her home, she lost her health insurance, Mr. Heck said. Ms. Rosati, who still lacks health insurance but whose cancer is in remission, said she preferred not to discuss her experience because of her continuing love for the church.

In court filings, lawyers for the diocese denied her account of these events. If Ms. Rosati had worked for a business or almost any secular employer, she might have prevailed under the protections of the Americans With Disabilities Act. Instead, her complaint was dismissed in December 2002 by Judge James G. Carr of the United States District Court for the Northern District of Ohio, who decided that the order’s decision to dismiss her “was an ecclesiastical decision” that was “beyond the reach of the court” because “the First Amendment requires churches to be free from government interference in matters of church governance and administration.” . . .