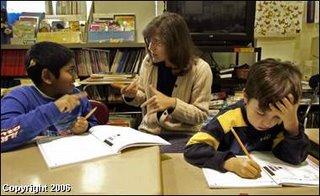 One of the more insidious aspects of NCLB can be found in regulations dealing with learning disabled (LD) students forced to take exams that most of them do not even understand. The failure and frustration associated with these tests has led one superintendent and former special ed teacher in Delaware to sue the state and challenge "the sytem" on behalf of children and their families.
------------------------------------------------
"If you are talking to someone in a different language, imagine the frustration when you have to perform and don't know what they are talking about," Andrzejewski said, adding that the constant failure demoralizes many. "It's more than frustration. These students, they cry. Sometimes they act out. They want to do [well]."

Andrzejewski, who believes federal law allows for alternate assessment, blames state leaders for not allowing it in Delaware. State officials, in turn, say they can't do much without approval from the U.S. Department of Education.

"Federal law has been very clear about what states can and can't do," said Robin Taylor, associate secretary of assessment and accountability with the state Department of Education. "They say they are giving us flexibility. States are sitting, waiting, poised, ready to go off and do something, but we don't know what to do yet."

Initially, No Child Left Behind offered three options: regular assessment, assessment with accommodations and assessment in an alternate format. In December 2003, a fourth option allowing for modified achievement standards was added, but it was exclusively for students with significant cognitive disabilities.