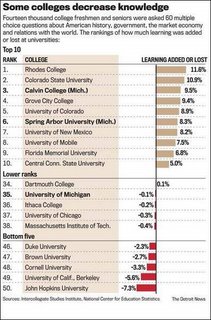 It is called the National Civic Literacy Board. It is packed with right-wing conservatives, and its intent is the purging of American universities. Check out the negative learning going on, according to the "research findings" shown in the chart at left (click it to enlarge). Is there any doubt which universities are in the cross-hairs?

The commentary below by John Seery is from Huffington Post:

Watch out. The conservative assault on our nation's colleges and universities continues.

We've seen David Horowitz's book warning about "dangerous" professors and his clumsy Academic Bill of Rights campaign. We've seen Sec. of Education Margaret Spellings' report on the Future of Higher Education and its proposal to submit our 6000 autonomous colleges and universities to strict federalization.

And now, last week, we received a report--"The Coming Crisis in Citizenship"--from the Intercollegiate Studies Institute's National Civic Literacy Board, which claims to prove that our colleges and universities (read: those bastions of liberalism) are failing to deliver a proper Preparation for Citizenship to our nation's young adults, and may even be corrosive to our American way of life.

The ISI-funded study was based on a multiple-choice examination given to 14,000 college freshman and seniors to assess their factual knowledge in four areas: American History, U.S. Government, America and the World, and the Market Economy. The National Civic Literacy Board assigned an "F" grade to college students in all categories. The Board emphasized that college seniors barely knew anything more about such matters than incoming frosh. And it emphasized that many of the most prestigious schools and most costly schools (read: most liberal schools) produced the worst overall scores, and it singled out Brown University, Georgetown University, and Yale University as places where "negative learning" seems to transpire between incoming and outgoing students. Finally, somehow on the basis of this multiple-choice examination, the Board claims to "prove" that students who have "demonstrated greater learning of America's history and institutions were more engaged in citizenship activities such as voting, volunteer community service, and political campaigns."

So what's going on here?

It just so happens that I attended a conference on civic education last week at Georgetown University. It just so happens that the ISI apparently helped fund that conference (unbeknownst to me beforehand). It just so happens that in my own talk at the conference I severely criticized the findings of the National Civic Literacy Board. I pointed out, for instance, that Stanford Professor of Education and History Sam Wineburg, in his award-winning book, Historical Thinking and Other Unnatural Acts, and in subsequent studies had already demolished the scholarly credibility of a fact-based diagnostic as a way of teaching and understanding American history. Moreover, the premise that you are a "better" citizen and will be more "engaged" because you can identify Yorktown as the battle that brought the American Revolution to an end is just silly.

After my talk, a tall gentleman came up to me and introduced himself: Lt. General Josiah Bunting III, President of the National Civic Literacy Board. Oops! He was eminently gracious, I must say. We exchanged a few polite words. And then I heard him deliver his own address to a lunchtime audience. Most of it was about the virtues of a proper university education, all very above board. But toward the end of his remarks Lt. General Bunting showed more of his own cards. He lamented the presence of so many liberal faculty members in U.S. colleges and universities today, and he concluded his talk thus: "This must change."

I did some Googling. Turns out that the National Civic Literacy Board isn't so national after all. It is simply stacked with conservatives. The directors, besides Lt. General Bunting, include a former Reagan administration official, a former George W. Bush administration official, and a retired Rear Admiral who was Director of Naval Intelligence. Board members include U.S. Senator George Allen; the CEO of the Philip M. McKenna Foundation; the CEO of the National Association of Manufacturers; a Senior Fellow from the Hoover Institution; Roger Kimball, Editor of the New Criterion; Robert George, Director of the Madison Program at Princeton; a former Secretary of the Army; a Wall Street Journal Editorial Board member; a retired Vice Admiral in the Navy; an American Enterprise Institute scholar; a former CEO of Household Finance Corporation; and Lewis Lehrman of the Lehrman Institute; and so on. Does the mission of investigating civic literacy really require such a one-sided, unrepresentative, and so obviously politicized panel?

Conservatives are jumping all over the report with glee, and you can bet that they will press hard for the Board's recommendation that these colleges need to be held "accountable" for the way they contribute to the "civic life" of America, or not.

After I started to realize what was going on at the conference, namely that some folks in attendance saw "civic education" as a proxy and euphemistic front for a conservative agenda, I approached Lt. General Bunting with another line of inquiry. I pointed out to him that I, too, sometimes give my own students a pop quiz on American civics and American civic values, but my questions aren't about the particularities of the Civil War or Keynesian economics. Instead, I ask the following:

Remarkably in my experience, I've found that my students understand those questions very well and are in lock-step unanimity in endorsing those civic values. They're not the civic dummies that the National Literacy Board is trying to make them out to be.

I heard at the conference several conservative commentators bemoaning the alleged fact many liberal academics refuse to assert the "moral superiority" of the American government over other governments. What I hear in those words is something ominous: the search for an unassailable American patriotism and therewith, the search for a blanket justification for war; and also as part of that campaign, a rearguard search for scapegoats for the current national malaise in our present wartime fiasco--to be attributed no longer to the "liberal media" or to "liberal politicians" or to "liberal judges" but now to "the liberal professoriate." Holding institutions "accountable" will mean promoting American civic virtues as these conservatives define those virtues, while silencing dissenters by other means.

Why didn't the National Civic Literacy Board simply call itself the new Un-American Activities Committee? Wouldn't that have been the more forthright and honest name?

Why won't mainstream media outlets conduct even a modicum of research to inform readers and viewers about the not-so-hidden agenda behind a report such as this, instead of merely reciting uncritically the Board's findings and recommendations? Shouldn't there be some civic education about the American founders' views about the importance of a vigilant Fourth Estate?