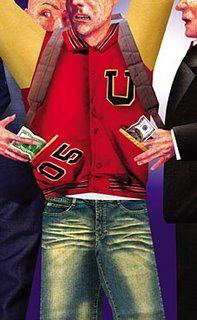 House Majority Leader John Boehner's friends at Nelnet and other lending institutions (see story from The New Republic for background) are banking on Wall Street to bail them out now that most Republicans have flip flopped on their support for that juicy 9.5% deal on student loans.

The OIG report on the student loan scandal at ED, (not to be confused with the Reading First scandal at ED), could bring the gravy train for private lenders to a screeching halt. The problem is the regulations being imposed by ED could also bring the bond market to a halt and even higher costs for financing education.

Dire warnings about the future stability of the bond market, reported in this Dow Jones story, have already led 14 senators to write a letter to Spellings implying any "retroactive" applications of the regulations could "unsettle the market for student loan-backed tax-exempt bonds."

Bond holders, issuers and underwriters are warning that U.S. Department of Education regulations issued in September could unsettle the market for student loan-backed tax-exempt bonds.

The regulations are intended to implement student loan provisions in two recent pieces of legislation, the Taxpayer-Teacher Protection Act of 2004 and the Higher Education Reconciliation Act of 2005. But while Congress intended the changes in those bills to be prospective, industry groups and their allies in Congress say the department's regulations appear to be retroactive.

"Such a retroactive change would harm existing bondholders who made investment decisions based on the good faith representations of underwriters and dealers," The Bond Market Association wrote in a letter to Education Secretary Margaret Spellings last month.

Harmful education policies and incompetence at ED that undermine teachers and students is one thing, but the prospect of investors losing confidence in the bond market is another.