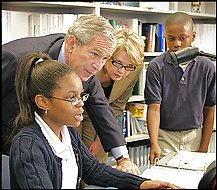 When the corruption-plagued President took his corruption-embattled Secretary of Education on a field trip Thursday, they chose, of course, one of those "high-flying" charter schools, the type that is intended to replace the regular public schools of D.C. and everywhere else in America where vouchers haven't already done the same thing. As Jon Stewart might say here in his hilarious but bad impression of Bush, "you see, a one-two punch, vouchers and charters, hee-hee."

The President's advance men did a good job yesterday, a good job of finding one of the 3 soaring charters that exist in D.C. The D.C. Public Charters School Board operates 34 charters, and 2 of them made Adequate Yearly Progress (AYP) last year (it was earlier believed that there were 4, but a story in WaPo on Oct. 5 made it clear that two of those charters previously stated as successes had fallen short of regular AYP) . The D.C. Board of Education operates 13, and one of those made AYP. So here is the scoreboard:
Truly impressive, Mr. President. I can tell that you are speaking from your heart when you spoke at one of those three successful (out of 47) charter schools on October 5:

I'm here to remind people that charter schools work, and they can make a difference in the lives of our children.

Stay the course--success is in the air.

In other areas of the country, some people aren't as optimistic about the corporate welfare solution to K-12 education:

Coleman argues that allocating facility monies for charter schools will take state funding away from neglected neighborhood campuses. Rather than pump funds into the charters, he says, pump money back into the community. "The charter system is a threat to the standard public education system," he says. "It causes districts, politicians and others to ignore the local school's quality."

Such sentiments may be gathering support across the country. In Ohio, Republican candidate for governor J. Kenneth Blackwell drew boos in a gubernatorial debate in Akron when he said that publicly funded charter schools were good for the overall educational system. By contrast, his Democratic opponent, Ted Strickland, drew thunderous applause when he stated: "About $500 million, I believe, was taken out of our public system to fund underperforming charter schools last year. I think that's a waste of resources — for-profit charter schools trouble me greatly."