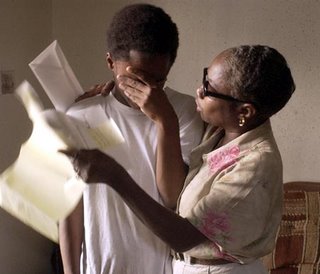 Next March it will be seven years since two graduate students and I began a research study (LEAP-ing Toward Accountability. . .(pdf) to find out how high-stakes testing (Louisiana Education Assessment Program--LEAP) was playing out in a poor urban elementary school in Louisiana.

Now the 2006 test results are back, and the only thing that has changed is that the educational genocide that began in 2000 is an accepted way of life now, as tens of thousands more poor children have been added to the heap of the "thowed away." Between 4 and 5 of every ten poor Louisiana children are held back in 4th grade every year as a result of not passing the LEAP. That does not take into acount the number of 8th graders and 12th graders, who must also run the same high-stakes gauntlet each year. (Photo above of 8th grader getting his LEAP test results: By Ted Jackson, winner of 2003 ASNE Award for Community Photojournalism)

In the meantime, administrators like Faith Joseph and school board elites like Phyllis Landrieu cling to a virulent ignorance or a preferred blindness that allows their crimes against children to continue unabated. Here is a clip:

After serving three years as assistant principal for the predominately African-American populated Woodlawn West Elementary School on the West Bank of Jefferson Parish, she tosses up her hands and shakes her head.

Joseph has tried everything to reverse an alarming decline in standardized test scores - tutoring, parent-teacher conferences and even disciplinary action.

Yet nothing seems to work, she said.

A few weeks back Phyllis Landrieu was thanking Katrina for destroying the school system that she now plans to re-build as an uncharted charter system. She has since moved on from "I say, 'Thank you, Katrina' all the time," to now blaming parents for the effects of poverty:

She [Landrieu] said undiagnosed health problems, child abuse and neglect and “most important, lack of socialization training” are underlying reasons for poor performance.

And the "socialization training" derived from direct instruction is just what she has in mind as the key strategy for the chain-gang charters of the new New Orleans. The gamble here is that turning schools into detention centers will end the necesity for adult detention centers. Wish in one hand, Ms. Landrieu, and spit in the other--see which one fills up first. 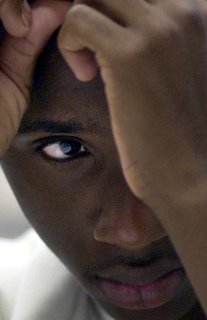 I have to give credit to Ms. Joseph, however, for having at least a clue that is not being turned into a cudgel against the victims--which is more than I can ever say for Landrieu:

Joseph says there is a gap, or “school life bubble,” between home life and school that doesn’t always promote academic performance.

“A parent raising four kids and who worked a minimum-wage job once asked me, ‘What do you want me to do? Send my kids to school with clean clothes or help them with their homework? I can’t do both.’”

We did not need high-stakes tests to tell us how far behind poor children were and are, but now we can use those tests results to assuage our own guilt by blaming the victims, punishing the victims, and then by creating an orderly and invisible underclass. All the while we can pat ourselves on our backs for our color-blind and poverty-blind high standards and our bold determination to offer poor parents "choices."
(Photo by Ted Jackson)
at 5:29 PM