A Big Joke, But Not Very Funny 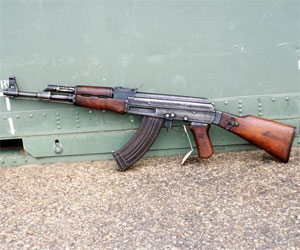 It goes like this: A kid in a black raincoat walks into a middle school with an AK-47, points the gun at students and administrators, and then shoots up the ceiling, breaking a water pipe. He says, "don't make me do this" and is arrested.

Punchline: Bush and Spellings will have a big summit this week on school violence, but measures to limit access to AK-47s or any other guns will not be on the table for discussion.

Here is part of the AP story from CNN:

JOPLIN, Missouri (AP) -- A 13-year-old student wearing a mask and a long, black trenchcoat fired an AK-47 into the ceiling at his school Monday morning after confronting a pair of students and administrators, telling them "please don't make me do this," officials said.

No one was injured, and the boy, who police said was following a well-thought out plan, was taken into custody.

The seventh-grader pointed the gun at the two students, Principal Steve Gilbreth and Assistant Superintendent Steve Doerr, telling them "not to make me do this," Superintendent Jim Simpson said.

He then fired the shot into the ceiling, breaking a water pipe, and said again "Please don't make me do this," Simpson said.

Doerr and Gilbreth persuaded the youth to leave the building, and he was confronted by two police officers who had their weapons drawn. The student dropped the rifle and was taken into custody, Simpson said.