A Price to Play 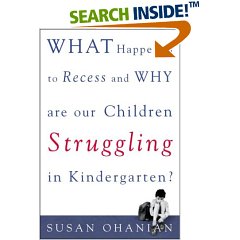 One of the consequences of the pressure cooker schools that children have been placed in as a result of the impossible test targets of NCLB is the elimination of recess. Where kids once had play time with their friends, many of them, particularyly the poor, now sit with teachers or tutors doing the mindless direct instruction of parrot reading and math programs sold to their schools by Bush insiders. The resulting cost to this generation of educationally-abused children remains inestimable.

So just as schools in poor communities have been turned into work camps for the preparation of a new generation of mindless and unquestioning drones, a new report from the American Academy of Pediatrics has just been issued that concludes that what children need most today is some good old-fashioned play.

My question to these esteemed pediatricians: where were you six years ago when our national education establishment declared war on childhood? What treatment protocols will you now recommend for the anxious, depressed, and obese generation of children who have been sacrificed in the hopes of realizing a political agenda? Where was your expertise when it was needed? In the same protected cocoon of professional practice that the psychologists hide in, that apolitical nook that offers cover from the potential wrath of the fascistic crooks who have hijacked our public institutions?

From the AP's story yesterday:

. . . Numerous studies have shown that unstructured play has many benefits. It can help children become creative, discover their own passions, develop problem-solving skills, relate to others and adjust to school settings, the academy report says.

"Perhaps above all, play is a simple joy that is a cherished part of childhood," says the report, prepared by two academy committees for release today at the group's annual meeting in Atlanta.
A lack of spontaneous playtime can create stress for children and parents alike. If it occurs because young children are plopped in front of get-smart videos or older children lose school recess time, it can increase risks for obesity. It may even contribute to depression for many children, the report says. . .