Some time during the last year of Sally Stroup's stay as Asst. Secretary for Higher Ed, some mighty private documents got shipped off to a group of lawyers defending the online University of Phoenix against charges of bilking the Feds of $3,000,000,000. It seems that a "mistake" was made inside ED when a FOIA request came from University of Phoenix attorneys who were seeking information regarding details of a suit filed to recover part of the $3 billion that UP had garnered by allegedly paying enrollment recruiters to sign up anyone who could qualify for federal Pell Grants. As a result of the "mistake," the entire legal strategy of the whistleblowers was shipped off to the attorneys representing UP's parent company, the Apollo Group.

A couple of coincidences worth noting here: 1) Sally Stroup worked for University of Phoenix before hiring on at ED, and 2) Sally was responsible for writing the snippet that was included in the cons' big education bill last spring, the snippet that eliminated the need for real campuses for college programs funded by federal student loans and grants from ED. This change will result in many billions more going to the online for-profit colleges of the higher ed industry, which are now being heralded as the great equalizer for poor and minority students trapped in rural or urban hellholes, and who, most likely, will remain no less trapped after their virtual adventures in learning at the online for-profit diploma mills that are popping up faster than you can say, thank you Sally.

Thanks to Marty Solomon for the tip on the story, which appears at the Chronicle. Here is a clip:

It is unclear how the documents were released. The False Claims Act requires that plaintiffs' legal strategies and working papers be shared with the federal agencies involved in the lawsuits.

In a statement Monday, an Education Department spokesman said the agency "is aware that certain department records were released in error. ... The department is taking appropriate action to safeguard its records, but we cannot comment further as your questions concern matters in litigation." The spokesman, Jim Bradshaw, said he could not say if the department is investigating who approved the release of the records.

In this case, lawyers at the Department of Education were consulted as part of the review process for Apollo's Freedom of Information Act request. One of them, Christine M. Rose, who works in the general counsel's office, filed a declaration in federal court last week, saying the department had determined "that the disclosure statement and witness-interview notes are privileged documents."

"There are a lot of people over there trying to do the right thing," but they keep getting undermined, said Nancy G. Krop, another lawyer for the whistle-blowers.

Phoenix, the largest private university in the nation, has strong political ties. Its former chief lobbyist, Sally L. Stroup, was appointed assistant secretary for postsecondary education, the top higher-education office at the Department of Education, by the Bush administration. She left that post in April, after four years. 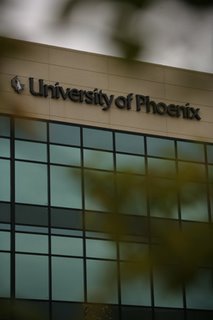 UofP, by the way, has other legal fronts to defend. It seems that non-Mormons have filed papers against UP for discriminatory practices:

PHOENIX - The University of Phoenix has been sued for religious discrimination by the U.S. Equal Employment Opportunity Commission.

The federal civil rights lawsuit, announced Wednesday, accuses the private university of favoring employees who are members of the Mormon church. Employees who are not associated with the Church of Jesus Christ of Latter Day Saints were treated less favorably on new student recruiting leads, tuition waivers and reprimands, the commission alleges.

You know how pushy those non-religious types can be!