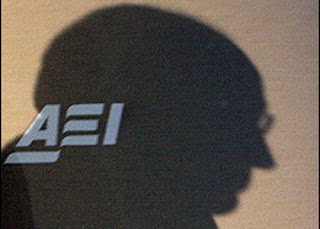 (Photo by Associated Press) We live in amazing times. As we sit at the brink of a manmade global warming calamity from which there is no return unless immediate action is taken to do things differently, the powers of unrestrained greed are actively campaigning to alter the facts, to hide the facts, to block the fact, to do anything to avoid the risk of decreasing corporate revenues. And that includes sacrificing the future of the human race.

Three days ago Exxon Mobil announced earnings in 2006 of $35.9 billion ($1,250 per second), an all-time American company record. Exxon Mobil is not holding onto all that cash, however. They are investing to buy influence in every sector, from the National Science Teachers Association, which recently turned down free copies of An Inconvenient Truth, to the conservative think tank, the American Enterprise Institute, which has offered to pay scientists $10,000 plus expenses to write articles sliming the report from the UN's Intergovernmental Panel on Climate Change (IPCC).

Meanwhile, conservative fools who have convinced themselves that the facts constitute a partisan issue decide that children cannot see An Inconvenient Truth unless an oily lie is offered equal time:


In a swift 3-0 vote at its January 9 meeting, the Federal Way School Board ignited a fire among students and parents.

After a short debate with little initial public comment, the board effectively placed a moratorium on the highly-acclaimed film on global warming by former Vice President Al Gore, "An Inconvenient Truth."

The film - considered too controversial by the conservative board and a handful of parents who questioned the movie's place in Federal Way classrooms - can no longer be shown in district schools without an accompanying opposing viewpoint.

"We have a policy that any film shown in schools has to be approved by the principal," Board Vice President David Larson said during the January 9 meeting.

"We also have a policy...number 2311...that says when there is a controversial view presented, opposing views must be presented as well."

While an overwhelming majority of scientists consider the Gore film to present an accurate portrayal of the alarming facts about global warming, Larson told the board that he had compiled a few articles of his own from "a number of credible scientists," including an article entitled "A Convenient Lie." . . .

Is there some horrific pride that these people feel as they drink the kool-aid that has been mixed for them by a government now under corporate management? Is a willful suicide to be the final hubristic act of those who refuse to be betrayed by the truth?

Meanwhile, in Britain An Inconvenient Truth is required viewing by all British teens in schools.
at 7:21 AM