Is Dying a Legitimate Excuse for Failing? 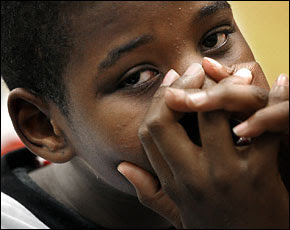 Can't let a little tooth infection get in the way of your impossible demands for all children, right, Ms. Spellings? (Photo by Linda Davidson, WaPo)

If his mother had been insured.

If his family had not lost its Medicaid.

If Medicaid dentists weren't so hard to find.

If his mother hadn't been focused on getting a dentist for his brother, who had six rotted teeth.

By the time Deamonte's own aching tooth got any attention, the bacteria from the abscess had spread to his brain, doctors said. After two operations and more than six weeks of hospital care, the Prince George's County boy died.

Deamonte's death and the ultimate cost of his care, which could total more than $250,000, underscore an often-overlooked concern in the debate over universal health coverage: dental care. . . .