Uncovering the Privatization Snake in the NCLB Woodpile 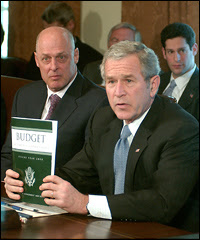 I heard James Lytle speak on a panel discussing NCLB at Teachers College a year or so ago, before he retired as superintendent of Trenton Public Schools. When someone asked about how parents were responding to the growing list of failures that NCLB guarantees with its impossible performance targets, he noted that parents in Trenton have concerns other than what tests their children are being humiliated with: they are more worried about their children being shot on the way home from school. One may suppose they still are, just as their children are still expected to score the same on the State tests as children living in the leafy suburbs of Princeton. (Photo: Ron Sachs, Getty Images)
Here is a clip from a Lytle commentary, "The Snake in the 'No Child Left Behind' Woodpile," that appears in this week's Ed Week. Lytle understands that privatization of schools is the end result and the real target that the corrupted market model ideologues set out to accomplish when this cynical, abusive Act was crafted. It's worth noting that Bush's 2007 essentially-flat education budget for 2007 includes $300,000,000 for vouchers. You might say, Dr. Lytle, that the snake is out of the woodpile:

In the first five years of the federal No Child Left Behind Act, much attention has been focused on implementation issues—from how to manage the increasing number of schools and districts “in need of improvement” or in “corrective action,” to problems with testing programs, adequate-yearly-progress reporting, and the law’s highly-qualified-teacher requirements. But looming in the background is an element that will soon raise the stakes for implementation, one that has received much less public discussion: the requirement that states intervene in schools and districts not meeting AYP requirements.

As Congress takes up the law’s reauthorization this year, it’s important to keep in mind the legislation’s time frame: Public schools and districts receiving federal funds must have all their students (less those with severely handicapping conditions) at proficient levels of performance in reading, mathematics, and science by 2014. The trick is that the performance standard increases every two years to ensure attainment of the required 100 percent proficiency. Thus, schools that have apparently been making progress are continually held to higher standards; those that have not been making adequate progress (even if they have shown improvement) have an even more difficult challenge; and those that have consistently met the standard may suddenly find their levels of performance no longer sufficient. As a result, the number of schools identified as needing intervention is likely to accelerate.

The emergent No Child Left Behind issue is the mandate that state departments of education intervene in schools (or districts) that have not made adequate progress for four or more years, and that the intervention follow the prescriptions in the federal legislation. These include the following (with the date they became applicable in parentheses):

If these actions do not produce the intended results, then the following additional prescriptions are available in 2007:

• Turn the school (or the district) over to a state agency or private firm.

There is no existing knowledge base in research or practice, however, that demonstrates whether universal proficiency is even possible. Nor is there accumulated research demonstrating that any of the sanctions mandated in the law, either singly or in combination, will lead to sustained improvement in student achievement or school performance. There are no explicit incentives offered—other than to avoid intervention, corrective action, reconstitution, or takeover. The presumption in the No Child Left Behind law is that the threat of sanctions will force schools and districts to implement research-tested best practices, yet the evidence on school change indicates that trust and willingness to risk are the precursors to sustained improvement.

The evidence to date for the efficacy of interventions already tried is limited. The choice sanction has been notably unsuccessful (fewer than 1 percent of eligible children participate), and the supplemental-services intervention has been the subject of heated controversy over who will provide the services and who will evaluate their effects. None of the other sanctions has yet been broadly enough implemented to yield a sufficient record for evaluation. But as the list of interventions indicates, spring 2007 is “showtime.” State departments of education and/or local school boards will have the authority and responsibility then to make drastic changes at schools that have not made progress.

Thus the conundrum: How can schools and districts (and states, for that matter) be held to account for improvement that no one currently knows how to accomplish? Are the imminent sanctions really solutions? Shouldn’t the intervention timelines be postponed, modified, or extended until the knowledge base catches up with the policy?

Are the imminent sanctions really solutions?

The prospect of a rapid increase in the number of schools and districts in “corrective action” status and the inability of state departments of education to provide support and oversight are likely to open the door wide for private-sector management, choice, and consulting interventions. Leading-edge versions of this have already emerged in Philadelphia, Chicago, Washington, and Cleveland, cities whose central offices are becoming management corporations for diverse sets of schools and services: charters, private and nonprofit corporately managed schools, special-needs student outplacements, tutoring services, packaged curricula, and voucher programs for private and parochial schools. An increasing number of urban districts are complying with No Child Left Behind mandates by outsourcing low-performing schools, then changing vendors in the instances when a school doesn’t make adequate progress. Yet none of the vendors has been able to demonstrate that it can intervene in low-performing schools, whether elementary or high schools, and consistently help those schools meet AYP-mandated levels of achievement. In effect, the districts move the walnut shells each time the Education Department can’t find the pea.

This spring, the growing number of schools and districts in corrective action will provide the prospect of expanded corporate entrée. Shareholders, CEOs, and state bureaucrats may prosper, but nothing would suggest that kids will be better served.

The right thing to do is to slow down the sanctions timetable until the reauthorization debate is completed, funding for necessary supports is in place, and a research base has been developed that undergirds the proposed interventions. Otherwise, we are conducting another grand experiment with those least able to control their fates.

James H. Lytle retired as the superintendent of the Trenton, N.J., public schools in June of 2006, and is now a practice professor at the University of Pennsylvania’s graduate school of education, in Philadelphia. He can be reached by e-mail at jhlytle@gse.upenn.edu.