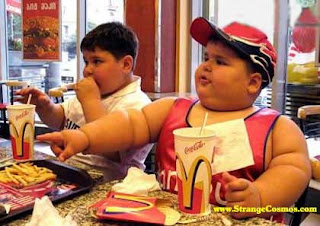 If we are to believe Arkansas politicians leading the charge to repeal the test, parents are on the warpath about a new test their children must take. No, no, it's not NCLB and another one those scantron lobotomies that the majority of parents continue to put up with--it is the BMI (body-mass index) test. Since 2003 when former fatty Governor Huckabee pushed through the new law, schools have been charged with unlocking children from their testing desks long enough to weigh them and to measure their corpulence. These numbers are then sent home to parents to initiate interventions that we can imagine would include the health and physical education information and skills that were once subjects taught in school, before the testing insanity took over the curriculum.

The parents' reactions? They don't want their children's esteem to be damaged by the intrusive BMI test. Never mind that their children's psychological, intellectual, emotional, and physical health is being sacrificed by a testing juggernaut aimed at producing compliant robots who will unquestioningly waddle down the job path for which their standardized test scores point them. Irony? What irony?
at 8:34 AM