The Center for American Progress takes a closer look at ED propaganda regarding federal education funding:

Skeptics of George W. Bush’s “No Child Left Behind” proposal believed from the outset that it was nothing more than a cynical ploy to give Bush credentials as an education advocate on the cheap. Instead of providing schools with the money to repair dilapidated buildings, hire competent teachers and replace badly out-of-date text books, Bush proposed to direct school districts across the country to use their limited resources on repeated testing of students—under the theory that additional testing would help identify problem schools and problem teachers.

Despite well-deserved skepticism, the “No Child” proposal became the signature component of Bush’s claim that he was a “compassionate conservative.” Six years later, Bush’s Secretary of Education, Margaret Spellings, continues to mask the administration’s cynicism in rosy pronouncements, as she did earlier this week when she claimed the president’s new budget would result in a 41 percent increase in education funding relative to 2001 levels.

A number of news organizations understandably interpreted that to mean funding had increased by that amount since the No Child Left Behind, or NCLB, law was signed. Nothing could be further from the truth. Indeed, a quick walk through the history of NCLB funding reveals that the increases have been paltry even counting the new budget request (see chart).

By the time Bush took the oath of office, it was apparent that he would need the support of skeptical Democrats if his campaign promise were to become law. Conservatives in the president’s own party had always worried about the federal government injecting itself into the affairs of local school districts and many did not feel the federal government should even have a Department of Education, much less one guiding reform policies at the local level.

But few Democrats believed that more tests were the magic bullet that the White House contended they would be. They felt that poor schools were largely the result of inadequate resources and the plan did little if anything in that regard. In fact, some Democrats felt the plan might well serve as a substitute for additional resources.

While the Congress was debating the No Child Left Behind legislation they were also deliberating on the Fiscal Year 2002 appropriation bills. As the year progressed, there was increasing pressure from Democrats and some pro-education Republicans to appropriate significantly more money for elementary and secondary education programs than the president had requested as a means of assuaging such concerns about the “No Child” law.

Ultimately, Congress forced the Administration to accept a $4.7 billion increase in FY 2002 funding for elementary and secondary education—more than 3.5 times the increase that the White House had proposed. As a further indication of good faith in “balancing resources with reform,” the White House agreed to substantially increase the authorized funding levels for key education programs in future years.

These “authorized” levels provided no guarantee of future appropriations. But they did indicate a willingness by the White House to work in the direction of substantially greater federal support for local schools.

Those two concessions provided Bush with the support needed to overcome conservative opposition and on Jan. 8, 2002, he signed the No Child Left Behind Act into law. But having gotten the cooperation necessary to win enactment, the White House quickly forgot about the resources that were supposed to accompany the reform. The small increases that were provided in the first years after enactment were followed by proposed cuts.

For 2007, the president proposed a funding level that was less than 6 percent above the levels in place when No Child Left Behind was signed into law. That was less than half of the increase needed to just keep up with inflation. What’s more, during the period enrollment in elementary and secondary schools grew by more than one million students. 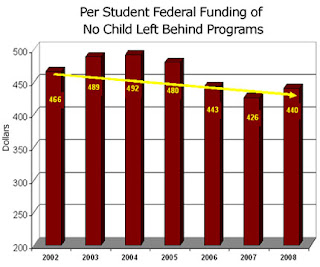 Secretary Spellings tried to sweep that sad history under the carpet on Monday by proclaiming that the president’s new budget would result in a 41 percent increase in education funding relative to 2001 levels. But absent the Fiscal Year 2002 appropriation, which passed Congress in December 2001, the increases have been paltry even counting the new budget request.

The Fiscal Year 2002 funding for the programs contained in the No Child Left Behind Act amounted to about $466 in 2007 dollars for every child enrolled in elementary and secondary schools. The Fiscal Year 2008 proposal will bring that level down to $440 or a drop of 6 percent.

Spellings remarkable ability of turning bad news into good news could prove to be a valuable commodity in this administration. Perhaps the White House may consider reassigning her to reporting on U.S. efforts in Iraq.