One of the top priorities of the oligarchs in charge at ED is the viral spread of apartheid corporate charter schools like KIPP and the KIPP knock-offs. The RTTT bribe machine has had a significant impact toward this end, as noted here by the drooling corporationists at the NAPCS:

. . . .Whatever his wins and losses in other areas, there’s no question that Obama and his Ed Sec Arne Duncan have shifted the terms of debate on ed policy – and moved charters into the center ring of reform. We’ve seen a lot of press about charter cap-lifts but that’s only part of the story. Duncan’s personal commitment to charter growth and accountability – and sometimes his direct intervention -- have combined with the dollar clout of RTTT to produce a number of gains (and avoidance of losses). Here’s a partial list:

Connecticut: Successfully defeated budget cuts to charters proposed by the governor (2009).
Delaware: An existing moratorium was allowed to lapse (2009).
Illinois: An additional 60 charters are now allowed. (Duncan said months ago that he wouldn’t give his home state a grant unless they took action on the existing cap.) (2009)
Indiana: An attempt to place caps and a moratorium on charters was defeated. (2009)
Louisiana: The state’s cap of 70 charters was removed. (2009)
Minnesota: An attempt to implement caps and a moratorium was defeated. (2009)
Ohio: Ensured governor’s proposed budget cuts were restored by legislature. (2009)
Rhode Island: Ensured state funds for new charters. (2009)
Tennessee: A bill to allow an additional 40 charters and to expand the types of students eligible to attend charters was enacted. (2009)
Michigan: Enacted a comprehensive public education reform bill in late December that lifts long-standing caps by allowing replication of high-performing charters. (2009)
Iowa: The state’s cap of 20 conversion charters was removed, as was the pilot nature of the charter law. (2010)
Massachusetts: Made a significant lift in the most important cap (there are several), that will permit an estimated 35,000 new charter seats in low-performing districts. (2010)

I say this is a “partial” list because this doesn’t take into account things like the new CA parent “trigger,” passed as part of an RTTT package, that can result in more low-performing schools becoming charters. . . . .

And that was just Round 1 of the bribes. Imagine the possibilities! 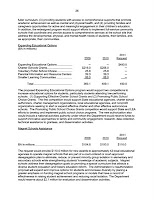 Now entirely unmentioned and unrewarded in RTTT are any incentives or bribes to encourage states or cities to counter the resegregation of public schools, which continues at a accelerating pace proportionate to the spread of the segregative corporate charters that the Duncan agenda puts front and center. And if RTTT does not have enough segregative "incents" for you, there's plenty more in the ED budget, itself (click to expand page at left). As a sop to the old school civil rights advocates, and as an expression of the policy schizophrenia that results when conscience has become corporate, there is $100 million thrown in for school systems that continue to operate under desegregation orders from the 70s? Remember desegregation orders? Remember desegregation?
at 10:21 AM