Segregationists on Wake County Board Continue to Make Headlines 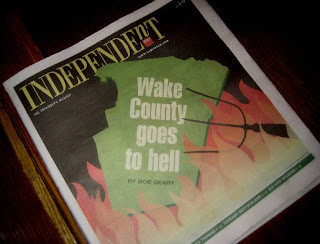 Wake County's Republican school board majority is all lawyered up with an old Jesse Helms protege and ready to take on all the "outside agitators" that the NAACP can send down from Washington to Raleigh. From today's News Observer editorial:

Farr has of late been quite active in service to the board - witness the $6,000 bill for January reflecting his $250 per hour rate applied to interviewing education and community leaders about changes in schools. He has queried the system's staff (including asking for information available on its Web site). Farr says he'll present a report with the results of his review.

Farr's fees are capped at $50,000 for his audit of legal services, and at another $25,000 for other legal advice he might provide. The elected board majority has leeway in spending the public's money for services, but it made an interesting choice here considering that it has in its long-time employ legal counsel with broad experience in education matters.

In other related developments, the segregationist Board majority has sent its diversity supporting superintendent, Del Burns, packing even though he will continue to get paid through June:

The move leaves the Wake County Public School System, hailed by some and criticized by others for its focus on keeping schools diverse, without a seasoned chief executive. The system faces a fiery community debate over its direction as well as a funding gap of at least $20 million for the next school year.