The Face of Hate in Wake County Votes to Resegregate 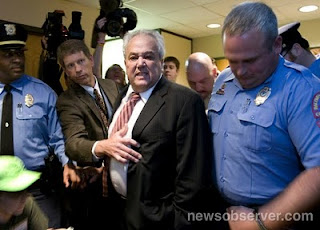 (Photo by Travis Long for the News & Observer)
Despite spirited protests by young people who came to chant, "hey hey, ho ho, resegregation's got to go," racism prevailed this evening as the Wake County School Board voted 5-4 along party lines to end one of the most successful school integration and diversity programs in the U. S. By doing so, the Republican majority, whose campaigns were run by the big money and the old, hateful veterans from the era of Jim Crow, brought Raleigh, Cary, and the rest of the Research Triangle back to the era of separate and unequal schools.

Now the battle must begin again to upend this decision and to restore the dignity of the people of Wake, the majority of whom are not behind this return to apartheid schools. These civil rights that have been denied tonight will be restored, and this grossest of social injustices will find a remedy. This will not stand.

From the News & Observer:

RALEIGH On a 5-4 vote, the Wake County school board’s ruling majority agreed tonight to stop busing students for diversity and to move to a community-based system of student assignment.

The community-based system will be developed during a nine to 15-month period and means the system will stop trying to mix students from different socio-economic backgrounds, even if the change creates more schools with high concentrations of students from poor families.

Board member John Tedesco, point man for the resolution, said the current system already allows for high numbers of high-poverty schools. More than three in 10 Wake Schools now have more than 40 percent students who qualify for free and reduced price lunches, he said.

“We are pretending that the problem doesn’t exist” and that the current solution works, Tedesco said.

The decision came nearly nine hours into a tumultuous day on which chair Ron Margiotta and four fellow Republican members elected last fall stuck to their guns on their anti-busing-for-diversity stand. Faced with some vocal opponents and shouted comments, they beat back multiple amendments by opponents who didn’t want to pass the resolution without more study, more research and more information on its cost.

Board member Carolyn Morrison, who opposed the resolution, introduced an amendment that put the ruling majority in the position of having to vote for or against “a plan that ensures that schools will not become segregated.” Ultimately, the majority didn’t support Morrison’s amendment.