With an editorial board that remains epically stupid on K12 education matters, it is not surprising to see Sam Dillon's news story today on the new NAEP reading data that preserves the warm glow that the Times always casts on the test and punish corporate reform model for schools. In fact, the headline points away from the disastrous NAEP reading scores released yesterday to the more rosy picture presented in the '09 NAEP math scores.

The scores continue a 17-year trend of sluggish achievement in reading that contrasts with substantial gains in mathematics during roughly the same period.

“The nation has done a really good job improving math skills,” said Mark Schneider, a vice president at the American Institutes for Research and a former official at the Education Department, which oversees the test, known as the National Assessment of Educational Progress. “In contrast, we have made only marginal improvements in reading.”

As Dr. Schneider is a political scientist who worked in Bush II's education department, he fails to point out that most of those gains occurred before the high stakes madness of NCLB started (click chart from NYTimes to enlarge). In fact, the gains since NCLB have been incremental, with 8th grade math scores of late flat-lining.

Now today's Times story does have something about the cratering NAEP reading results for 2009, but this, too, is placed on the sunny side of life inside the direct instruction hell holes once known as elementary school. With no good news of any significance to report about the world of parrot reading without comprehension, reporter Dillon goes to corporate reform insider, consultant, and attorney, Susan Pimentel, who has this to say despite all the evidence that indicates otherwise:

For example, Susan Pimentel, an expert on English and reading standards who is a member of the governing board that oversees the test, said that American schools were fairly efficient at teaching basic reading skills in the early grades. . . 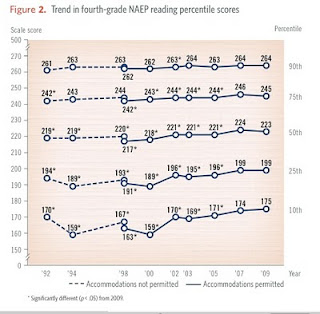 One group of students, though, has made significant gains in reading over the last decade: the nation’s worst readers. The average scores of fourth graders in the bottom 10 percent for reading increased by 16 points from 2000 to 2009. In contrast, the average scores of the nation’s best fourth-grade readers, those in the top 10 percent, rose by only 2 points during the same period.

“All the progress in reading is being made at the bottom,” said Tom Loveless, a senior fellow at the Brookings Institution. “Our worst readers are getting better, but our best readers are staying about the same.”

Our worst readers are getting better? Really, Tom and Sam? What the sunnysiders don't bother to report is that 11 of those 16 points gained, indeed, occurred between 2000 and 2003--before NCLB was instituted (click on chart to expand). 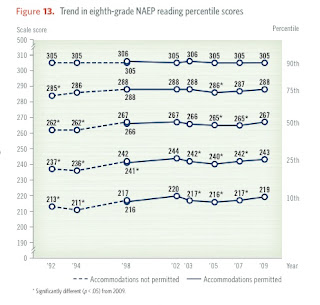