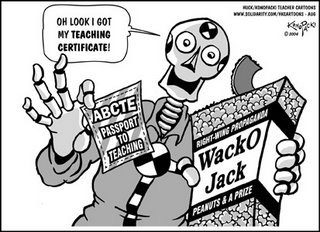 ABCTE continues to offer us a Petri dish to study the growing culture of corruption among the ed industry, the U. S. Department of Education, and the sludge tanks that pump up the propaganda that provides the life support for the education privatization agenda. I have posted a number of pieces here on ABCTE, that ED-sponsored effort to gut professional teacher preparation programs by offering a de-skilled and de-professionalized version of teachers with a credential earned solely on the basis of passing an online test.

With the help of a rogue’s gallery of insider hacks and trough feeders that include Hickok, Rotherham, Finn, and Keegan (just to name a few), ABCTE collected on September 25, 2003 another $35,000,000 in federal grant money to go with the $5 million it had already received to buy office supplies. Two days earlier, Michael Poliakoff offered these stirring words at a White House Conference on Preparing Tomorrow’s Teachers:

Both the National Council and the Education Leaders Council are deeply committed to accountability in education, and we have already commissioned a feasibility study of a proposed system to evaluate the relationship between ABCTE certification and student achievement, that is, whether teachers who receive ABCTE credentials are the ones who most significantly boost student learning. It is our duty to the American citizens who have funded this first phase of our project to assess energetically our contribution to the progress of our schoolchildren.

Yes, yes, accountability to American citizens and our schoolchildren. Now $40 million later we find that ABCTE has credentialed exactly 52 individuals who are now employed and who are now the focus of an invalid and unreliable survey report that asks principals about their “perspectives” on 39 of those 52 teachers. (According to my math, that works out to be $769,230.76 per ABCTE test-prepared teacher).

The big mystery here is not the shabby quality of the research, for it reflects the same slapdash and overreaching crap that was offered up back in June in another ABCTE study. What is more mysterious is how a report like this one that truly resembles the work of precocious undergraduate could be issued under the auspices of Mathematica Research. Could that be where some of the $40 million has gone?

The study (the full report here) was conducted as a telephone survey with principals who had either hired or supervised these 39 ABCTE teachers. The biggest problem for the researchers, who clearly wanted to show that ABCTE teachers are rated as high as other teachers, arose from the fact that 27 of the 39 teachers were already teaching prior to receiving this miracle credential. That makes it hard to attribute supervisor ratings, unexceptional though they were, to ABCTE’s miracle credential. Another problem—all interviewed principals had exactly one ABCTE teacher on which to base his comparisons.

Some principals may have hired the Passport holder out of desperation after observing a string of poor teachers. Others may have a very high standard. This was a special concern for us because each respondent reported on just one teacher. Therefore, we had no way to calibrate scores statistically (p.5).

Here are some of the more interesting findings:

And these findings come from a study that has smudgy ABCTE fingerprints all over it. Wonder what an un-bought evaluation would turn up?
at 8:36 PM